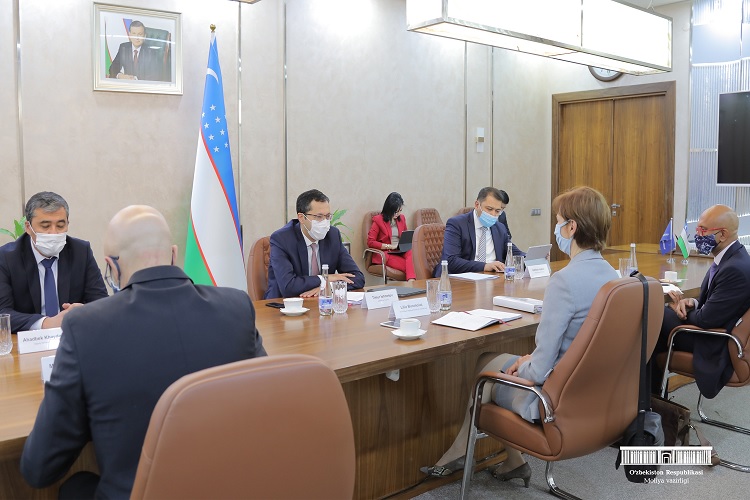 According to the Ministry of Finance, this was announced yesterday during a meeting between the Minister of Finance Timur Ishmetov and representatives of the World Bank – the Bank’s Regional Director for the Central Asia Region Lilia Burunciuc, World Bank Country Manager for Uzbekistan Marco Mantovanelli, and Senior Economist Vinayak Nagaraj.

The Government’s plans for economic development for 2021 were considered, including the next stage of reforms aimed at creating conditions for further growth of the private sector, attracting private investment, as well as implementing projects with public funding in the short and medium-term. Prospects for assisting the government in these areas were discussed within the framework of the partnership program currently being developed between Uzbekistan and the World Bank for 2022-2026. The parties exchanged views on possible areas of cooperation on the above-mentioned program, including assistance from the World Bank in the implementation of further reforms in agriculture, the aviation sector, and the chemical industry.

The government’s measures to mitigate the socio-economic consequences of the coronavirus pandemic were discussed during the talks. The need for continuing reforms in agriculture, in the management of state-owned enterprises, the banking sector, and other priority sectors was noted, despite the difficulties for the country as a result of the pandemic. It was emphasized that the previously implemented reforms help Uzbekistan to more effectively cope with the economic crisis.

Representatives of the World Bank expressed their readiness to continue providing further financial and technical assistance to the government in the implementation of important socio-economic changes in Uzbekistan.