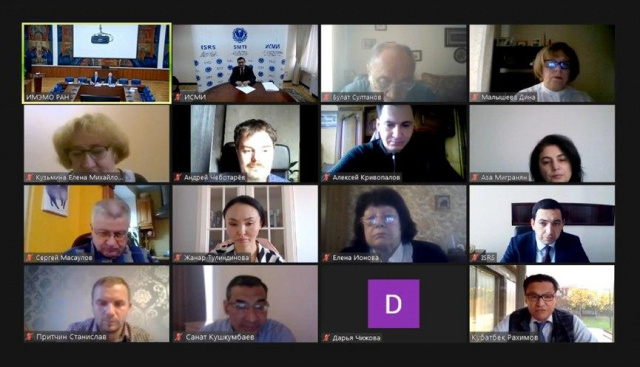 A virtual meeting has been held on “Pandemic in the Central Asian region: Socio-economic consequences and main political trends”. The event has taken place within the framework of the scientific and expert format “Central Asia Plus”.
The webinar, organized by Primakov National Research Institute of World Economy and International Relations of the Russian Academy of Sciences (IMEMO RAS), was attended by 26 experts from 10 leading research institutes of Russia and Central Asian countries.
Views were exchanged on new challenges and opportunities for socio-economic development of the region’s countries, arisen as a result of the impact of the novel coronavirus pandemic. The participants of the event discussed the prospects for regional cooperation and interaction with Russia.
ISRS Deputy Director, Sanjar Valiyev, noted that at present the Central Asian countries, as an integral part of world economic relations and the global market, are experiencing all the consequences of the crisis caused by the coronavirus pandemic.
Meanwhile, according to ISRS representative, while the world is witnessing an increase in restrictive and protectionist measures, Central Asian countries demonstrate a high level of cooperation, solidarity and mutual support.
S. Valiyev emphasized that from the first days of the coronavirus spread, the region’s countries have united their efforts to contain the spread of infection, actively cooperated in the exchange of information in healthcare, coordinated actions in transport, food security and border crossing. Despite the difficult epidemiological situation, the Central Asian states provided mutual humanitarian aid, including medicines, ventilators and personal protective equipment.
Speaking for the development of interaction between the region’s countries and Russia, IMEMO RAS Deputy Director, Sergey Afontsev, noted that such intellectual platforms as “Central Asia Plus” Scientific Expert Club significantly contribute to this.
He noted that this is the second meeting, which provided an opportunity together with specially trained and motivated specialists to find answers to the questions on the agenda of relations between the Central Asian countries and Russia.
The expert expressed the hope that this event will become an interesting fruitful platform and will fully meet the expectations in the future.
In turn, highly assessing the tendencies of the regional cooperation, Head of IMEMO RAS Center for Post-Soviet Studies, Eduard Solovyev, emphasized that the ongoing positive changes in Central Asia would have been impossible without the impulses given by Uzbekistan. This is undoubtedly the great merit of President Shavkat Mirziyoyev, the expert added.
E. Solovyev noted that in conditions of a shortage of the most necessary funds, ranging from masks to medical equipment, Uzbekistan provided humanitarian aid in demand at that time not only to the region’s countries, but also to Russia.
Noting the strategic importance of the region, the expert drew attention to the importance of the meeting of foreign ministers of Central Asian countries and the Russian Federation, held on October 15 this year. This format, E. Solovyev stressed, reflects the consolidated position of the six countries on further development of cooperation in politics, economy and culture. In his opinion, the parties have a great untapped potential for such a multifaceted interaction.
Summing up, the experts were unanimous in the opinion that the high level of trust and mutual understanding between the Central Asian countries and Russia made it possible to significantly minimize the negative consequences of the coronavirus.
The experts suggested continuing coordination of interaction not only within the framework of the recently launched new inter-MFA cooperation format “Central Asia + Russia”, which is promising, but also in other multilateral and bilateral formats. It was emphasized that the organization of systemic discussion platforms will facilitate the transition from intentions to practical implementation in the future.
In this context, it was noted that “Central Asia Plus” Scientific Expert Club can contribute to development of new effective approaches and proposals of a strategic nature in strengthening the multifaceted interaction of Central Asian countries and Russia.