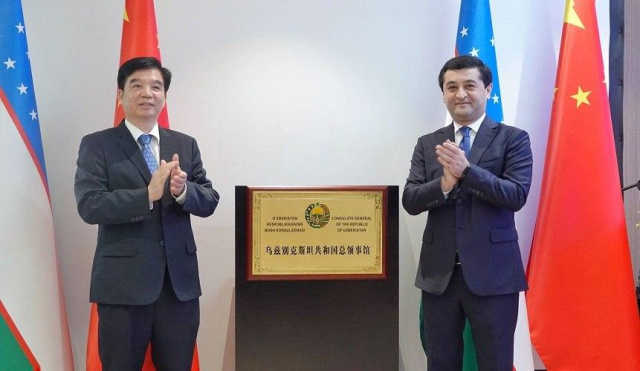 On October 27, 2020, Guangzhou hosted the official opening ceremony of the Consulate General of Uzbekistan.

The event was attended by the Ambassador of Uzbekistan to China Bakhtiyor Saidov, heads of the People’s Government of Guangdong province and Guangzhou city, as well as representatives of business, public and expert circles of this province, and our compatriots.
It was noted that the opening of the Consulate General will give an additional impetus to development of multifaceted relations between Uzbekistan and China, primarily to enhancing practical cooperation in all spheres, the growth of mutual trade turnover between Uzbekistan and southern provinces of China.
Guangzhou plays a key role in development of interregional relations, strengthening cooperation in such areas as trade, economy, investment, energy, transport communications and others.
The event also included a presentation of investment, export and tourism potential of Uzbekistan, which was attended by representatives of the Bureau of commerce, tourism and major companies of Guangdong province.
Participants were informed about favorable business climate in Uzbekistan, conditions for doing business in free economic zones, achievements in development of construction, textile and agricultural industries, as well as prospects for cooperation in these areas.