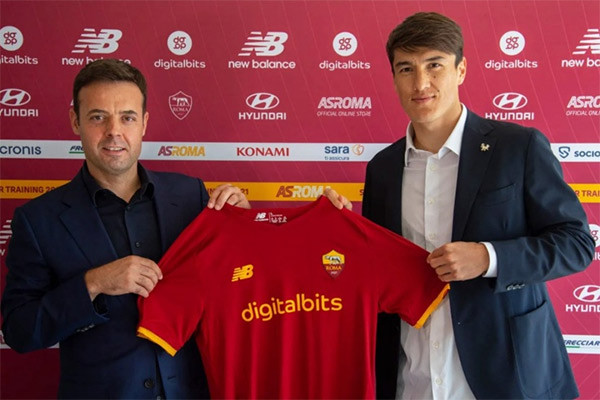 Shomurodov, 26, joins AS Roma on a permanent deal for an initial fee of 17.5 million euros, AS Roma said in a statement.

The agreement, which includes a number of performance-related clauses, also sees Genoa retain the right to a percentage of the profit, where applicable, that may arise from any future transfer involving the player.

Eldor Shomurodov has signed a five-year contract with the club that runs until 30 June 2026. Shomurodov will wear the No. 14 shirt for the Giallorossi.

“Joining Roma represents a huge step forward in my career – I will do everything I can to show I deserve this opportunity and to demonstrate what I can do at one of the biggest clubs in the world,” Shomurodov said.

“The speed in which this deal was agreed is testament to my desire to be able to join up with the coach and my new teammates and get to work as soon as possible.”

In his first full campaign in Serie A last season, Shomurodov scored eight goals in 31 league games for Genoa – including three in his final six matches for the Ligurian side.

The powerful forward, who is equally comfortable playing through the middle or on either flank, already has a wealth of international experience to his name: having scored 22 goals in 49 appearances for his country to date.

At domestic level, he has previously represented Mash’al and Bunyodkor in his homeland, along with Russian side FC Rostov – where he notched 18 goals and 12 assists in 91 games between 2017 and 2020.