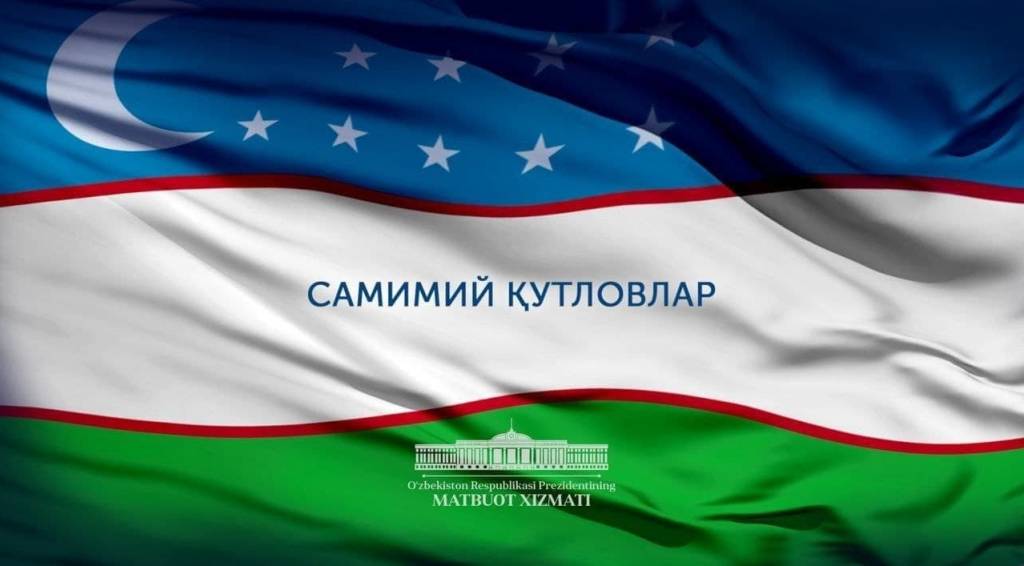 On July 24, President of the Republic of Uzbekistan Shavkat Mirziyoyev held telephone conversations with the leaders of several foreign states.

The leaders of these states warmly congratulated the Leader of Uzbekistan on his birthday, expressing sincere wishes for peace, wellbeing and prosperity to the multinational people of Uzbekistan.

The country's achievements in implementing the new program of socio-economic reforms and democratic transformations, its growing authority in the international arena were emphasized.

The fruitful results of the International Conference on the Development of Connectivity of Central and South Asia, successfully held last week in the city of Tashkent, were highly appreciated.

The Presidents discussed issues of cooperation and the international agenda, including the emerging situation in the Afghan direction.

President of Russia Vladimir Putin noted that Shavkat Mirziyoyev has well-deserved respect of his compatriots and high international authority as a prominent statesman, the real leader of his country.

The personal contribution of the President of Uzbekistan to the development of strategic partnership and alliance between the countries, productive collaboration in various areas was emphasized. Confidence was expressed that by joint efforts the further build-up of the entire range of cooperation will be ensured.

The current issues of Uzbekistan – Russia strategic cooperation and alliance were considered. The schedule of events at the highest level was discussed.

The observed dynamics of the development of multifaceted cooperation between the countries were noted with satisfaction, primarily the steady growth of the trade turnover, the successful implementation of cooperation projects in the sectors of the economy, cultural and humanitarian exchange programs. The importance of the early launch of the joint production of vaccines against coronavirus in Uzbekistan was emphasized.

During the talks with the President of Turkey Recep Tayyip Erdogan, views were exchanged on the current issues of the bilateral agenda.

It was emphasized that Turkey is glad to see and support the leading role of Uzbekistan in the region, which is strengthening under the firm leadership of President Shavkat Mirziyoyev.

I consider the sincere friendship between me and Your Excellency to be one of the symbols of the centuries-old brotherly ties between our countries and peoples, the Leader of Turkey noted.

Active mutual contacts and exchanges, contributing to the dynamic development of Uzbekistan – Turkey multifaceted cooperation, were noted with satisfaction. Despite the consequences of the pandemic, since the beginning of this year, the trade turnover has almost doubled, more than 230 new joint ventures have been established, important cultural-humanitarian programs are being implemented.

The Heads of state considered the schedule of the upcoming events and stressed the importance of thorough preparation for the Second Meeting of the High-Level Strategic Cooperation Council to be held in Uzbekistan by the end of this year.

The current issues of further development of Uzbekistan – Kazakhstan strategic partnership and full-scale cooperation were discussed with the First President of Kazakhstan – Elbasy Nursultan Nazarbayev. The importance of continuing the implementation of joint projects and programs in priority areas of interaction was noted.

Elbasy emphasized that the hard work and great political experience of the Leader of Uzbekistan contribute to the further prosperity of the country, as well as increase its authority in the international arena.

It was emphasized that today Uzbekistan is conquering great heights to consolidate and strengthen its statehood and improve the wellbeing of its people. In this regard, Nursultan Nazarbayev expressed confidence that Uzbekistan will continue to develop rapidly and achieve great goals under the leadership of President Shavkat Mirziyoyev.

Issues of further developing and strengthening Uzbekistan – Russia strategic partnership and alliance were considered during the talks with the Speaker of the Federation Council of the Federal Assembly of the Russian Federation Valentina Matviyenko. Active inter-parliamentary exchanges were noted with satisfaction, which contributes to the promotion of joint projects of multifaceted cooperation between the two countries.

Mrs. Matviyenko noted that a balanced approach in decision-making and the implementation of an effective state policy earned President Shavkat Mirziyoyev well-deserved respect in Uzbekistan and beyond.

“The recent history of the country is inextricably linked with Your name. A confident movement along the path of social transformations is being carried out under Your wise leadership, the most important tasks of strengthening interethnic harmony and interfaith tolerance are being solved, large-scale reforms are being consistently implemented aimed at ensuring the rule of law and protecting human rights. By constantly caring for people and their future, You are actually proving your loyalty to the principle: “If people are rich, then the state will be rich”, said the Speaker of the Federation Council of the Federal Assembly of the Russian Federation.

The leader of Turkmenistan noted that the modern history of Uzbekistan is inextricably linked with the name of Shavkat Mirziyoyev, marked by success in the political, socio-economic development of the country, as well as the growth of its authority in the international arena.

“You have completely devoted yourself to protecting the interests of people, realizing national goals and programs. This loyal service to the Motherland is highly commendable”, the President of Turkmenistan said.

The dynamic development of multifaceted cooperation between the two countries was noted with satisfaction, primarily in trade, economic, transport, communication, cultural and humanitarian spheres. An agreement was reached to hold the next meeting of the joint Intergovernmental Commission.

The Presidents dwelt on the preparation of the Consultative Meeting of the Heads of State of the Central Asian Region, which will take place on August 6 this year in Avaza National Tourist Zone. Views were exchanged on the agenda and program of the upcoming event.

During the talks with the President of Kazakhstan Kassym-Jomart Tokayev, the Heads of State noted the importance of further building up multifaceted cooperation and strengthening the strategic partnership between Uzbekistan and Kazakhstan, first of all, filling them with new projects and programs.

It was emphasized that tireless service to the interests of the state and people, political wisdom and will rightfully give the President of Uzbekistan indisputable authority among compatriots and high respect in the world community.

The President of Kazakhstan noted that today, under the strong leadership of Shavkat Mirziyoyev, Uzbekistan is successfully continuing the course for large-scale political and socio-economic transformations aimed at ensuring sustainable development and progress of the country, improving the wellbeing of Uzbekistan people, strengthening the image of Tashkent in the international arena.

The Presidents considered the schedule for the preparation of the upcoming bilateral and multilateral events at the highest level, including the Consultative Meeting of the Heads of State of Central Asia in early August in Turkmenistan.

During the talks with the President of Tajikistan Emomali Rahmon, issues of practical implementation of the adopted agreements and arrangements following the official visit at the highest level to the Republic of Tajikistan on June 10-11 this year, were considered.

The Leader of Tajikistan noted that the President of Uzbekistan, being in the highest post of President of brotherly Uzbekistan, makes an invaluable contribution to ensuring the stable political, economic and social development of the country, as well as strengthening its international authority, which is an example of selfless service to the high ideals of the prosperity of his homeland.

“All large-scale transformations of recent years in the country are connected with Your name. Your personal contribution is also significant in strengthening Tajikistan – Uzbekistan friendship, good-neighborliness and mutually beneficial cooperation”, Emomali Rahmon emphasized.

Preparations for the next Consultative Meeting of the Heads of State of the region at the beginning of the next month in Turkmenistan and Shanghai Cooperation Organization Summit in September this year in Tajikistan were discussed.

President Sadyr Zhaparov noted that under the wise and far-sighted leadership of Shavkat Mirziyoyev, the standard of living of the population of the Republic of Uzbekistan has increased, the country’s economy has embarked on a path of further development.

It was emphasized that thanks to the tireless work of the Leader of the country, Uzbekistan is strengthening its authority at the international level, contributing to strengthening close cooperation.

The Head of Kyrgyzstan highly appreciated the personal contribution of Shavkat Mirziyoyev to strengthening regional cooperation of the Central Asian countries.

The importance of practical implementation of the agreements reached during Uzbekistan – Kyrgyzstan summit at the highest level on March 11-12 this year in the city of Tashkent was emphasized. The main attention was paid to the promotion of joint projects in energy, transport, mechanical engineering, pharmaceuticals and other industries.

President of the Republic of Uzbekistan also received birthday greetings from the heads of foreign states, governments, international organizations, state and public figures.

In his congratulatory telegram, President of the People’s Republic of China Xi Jinping emphasized that in recent years, under the leadership of President Shavkat Mirziyoyev, reforms in all spheres have been comprehensively advancing in Uzbekistan, the construction of a new Uzbekistan is flourishing, which China is sincerely happy about.

The Leader of China noted that he attaches great importance to the development of China – Uzbekistan relations and is ready to work diligently with the President of Uzbekistan to promote China – Uzbekistan collaboration to a higher level for the benefit of the two countries and peoples.

President of the Republic of Korea Moon Jae-in in his message noted with pleasure that the agreements reached following the online summit in January this year are being steadily implemented.

“Our countries continue to develop a special strategic partnership, and together they join the will of the international community, aimed at inclusive green recovery and achieving carbon neutrality”, says President Moon Jae-in.

Congratulatory messages have been also sent by:

President of the Arab Republic of Egypt Abdel Fattah el-Sisi

President of the Republic of Azerbaijan Ilham Aliyev

President of the Republic of Belarus Alexander Lukashenko

Chairman of the Board of the Eurasian Economic Commission Mikhail Myasnikovich