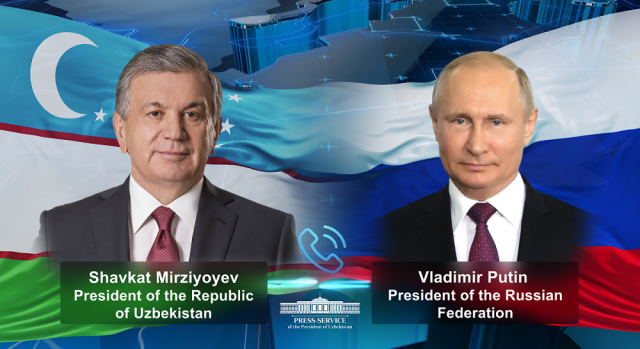 The President of Uzbekistan cordially congratulated the leader of Russia on his birthday, wishing sound health, wellbeing and success, as well as peace and prosperity to the friendly Russian people.
During the conversation, the current issues of further strengthening Uzbekistan – Russia strategic partnership and alliance were considered. Views were exchanged on the international and regional agenda.
Main attention was paid to the continuation of active joint work on the preparation for the upcoming contacts at the highest level in accordance with the agreements of the meeting of the leaders of the two countries in July this year in Moscow.
It was noted with satisfaction that despite the consequences of the pandemic, mutual visits are being carried out, the trade turnover is growing and the scale of investment cooperation between leading companies and enterprises of Uzbekistan and Russia is expanding. The implementation of important educational and cultural exchange programs continues.
The President of Uzbekistan also expressed his sincere gratitude for the practical assistance provided in the fight against coronavirus, in particular for sending a large group of leading Russian doctors and specialists to Uzbekistan.
The leaders noted the importance of continuing close coordination and interaction at the level of ministries and agencies of the two countries, including during the next meeting of the Intergovernmental Commission this month. First of all, it is about accelerating the preparation of priority programs and projects of multifaceted cooperation, including a long-term roadmap to strengthen cooperation between businesses and regions.
The heads of state also discussed the emerging situation in the region and considered the schedule of the upcoming events.
The conversation has taken place in a traditionally warm and friendly atmosphere.