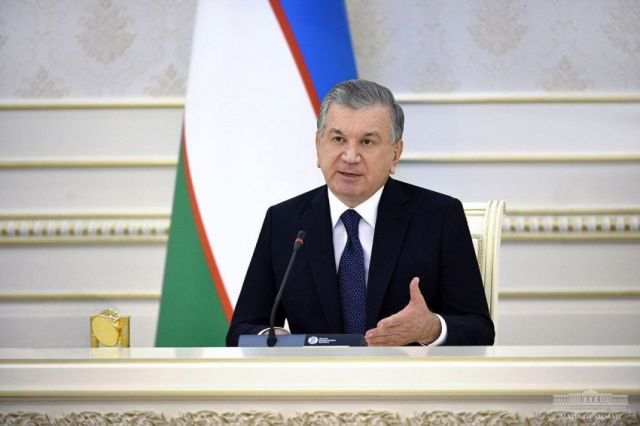 President of the Republic of Uzbekistan Shavkat Mirziyoyev has chaired a videoconference on reforming state-owned enterprises and privatizing state assets.

As is known, the President adopted a corresponding decree yesterday. Practical aspects of implementing the tasks defined in this document were discussed at today’s meeting.
Measures approved by the decree will affect more than 2 thousand state assets. It is planned to put up for auction 479 enterprises and 15 real estate objects, prepare 62 enterprises for privatization, transform 32 enterprises and industries, and improve the activities of 507 markets. In addition, 386 objects specified in the previous acts and 559 objects authorized by hokims will be put up for auction.
“Let's put it straight: a considerable number of resolutions on privatization have been adopted before. However, many enterprises and objects remain unrealized, do not benefit either the state or entrepreneur, since no manager has “gone down” and brought the knowledge and methodology in this matter to the final recipient”, said Shavkat Mirziyoyev.

Important areas of work in this area were identified at the meeting. It was noted that first of all it is necessary to choose a separate approach to each of 479 enterprises offered to entrepreneurs and put them up for auction in a simplified manner.
For example, “Tekhnik Tamirlash Butlash” enterprise in Karshi has 2 hectares of land and structures with a total area of 6.5 thousand square meters, which are not used. At the same time, hundreds of local entrepreneurs asked to allocate land to them. There are many such examples in other regions.
Therefore, it is necessary to conduct an inventory of empty land plots and structures, and to put assets unclaimed by enterprises up for auction. Instructions were given to create new jobs through privatization of state facilities specified in earlier resolutions, as well as those, the implementation powers of which were transferred to regional hokims.
The importance of increasing their investment attractiveness was noted regarding the privatization of 62 large enterprises.
Thus, the annual revenue of “Quqon Neftgaz Parmalash Ishlari” enterprise is 85 billion UZS, but the net profit is much less. Or “Khorazmsuvqurilish” has not made a profit for the last two years. At the same time, in Yangiaryk district, this enterprise has more than 1 hectare of land and structures with an area of more than 3 thousand square meters that do not generate income.
Responsible persons were instructed to conduct a “diagnosis” of such enterprises before privatization, to develop a targeted program for their audit and streamlining of reporting.
Issues of transformation of state design institutes were discussed.
The number of large construction companies is growing in the country. The task was set to improve the quality of projects and management system through close cooperation between construction companies and state design institutes.
The new system will be implemented primarily in “Qishloq qurilish loyiha”, “Og’ir sanoat loyiha”, “Georangmet LITI”, “Shaharsozlik LITI”, “Tosh uy-joy LITI”, “Toshkent boshplan LITI” design institutes. Then the state's share in design institutes will be sold to partner construction organizations.
Issues related to markets were discussed at the meeting. The need for a radical revision of the state's participation in more than 500 markets and shopping complexes was noted. Currently, 23 of them are unprofitable, 210 have low profitability.
The transformation of markets into centers not only for trade, but also for recreation and entertainment will have a good economic effect in such conditions. To do this, appropriate projects will be developed and a competition among investors will be announced. The winner of the contest will be awarded a bank loan on the best terms. In addition, if the market's revenues grow, and tax revenues and the number of jobs regularly increase, the entrepreneur will be able to buy out the state share of the market in installments.
Regional hokims were given instructions on organizing the activities of markets and shopping complexes in accordance with this mechanism.

Presidential Decree provides for transformation of 32 large state-owned enterprises and business associations. In particular, it is planned to transform Uzkimyosanoat, Uzavtosanoat, Uzdonmakhsulot, Uzsuvtaminot JSCs together with the entire structure. A special department has been established at the Ministry of Finance for this purpose.
Responsible officials were instructed to analyze the remaining industries in depth and prepare proposals for their transformation.
The importance of organizing consulting clinics and call centers on privatization issues for the population and enterprises, as well as creating and distributing a corresponding methodological guide was noted. The course of privatization will be regularly covered on television.
The Chambers of the Oliy Majlis were recommended to widely promote the essence of the Presidential Decree and establish parliamentary control over the transparency of the privatization process and compliance with the principles of justice. The importance of developing draft laws on privatization and state property management was noted.
Reports of Deputy Prime Ministers, heads of industries and hokims were heard at the videoconference.