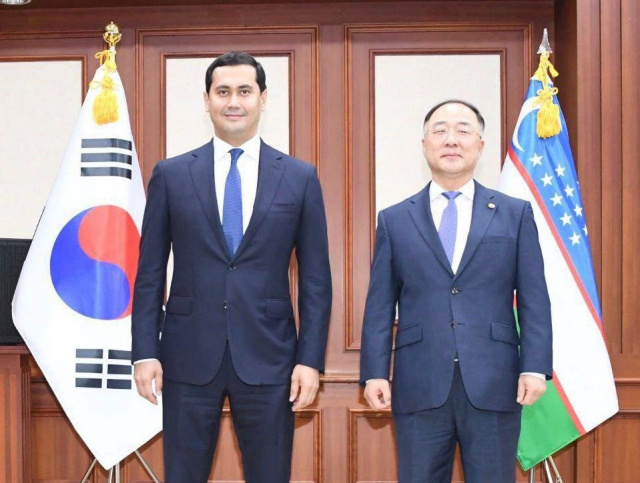 Deputy Prime Minister, Minister of Investments and Foreign Trade of the Republic of Uzbekistan S. Umurzakov held talks with Deputy Prime Minister and Minister of Economy and Finance of the Republic of Korea Hong Nam-ki on July 6, 2020. The sides considered the current economic cooperation between the two countries and identified further tasks for expanding bilateral cooperation.

Special strategic nature of relations between Korea and Uzbekistan was emphasized at the meeting, as well as it was also noted that the common priority of parties is full, high-quality and timely implementation of agreements reached during the mutual visits at the highest level.
Special appreciation was expressed for the decision of the Government of Korea to provide grant support for the implementation of COVID-19 emergency response program in Uzbekistan, which provides technical assistance in healthcare and social support for the most vulnerable segments of the population.
The initiative to develop a new 3-year program of financial and technical cooperation between Uzbekistan and Korea for 2021-2023 with an increase in its budget to newscat="%" billion was supported on a mutual basis.
The Korean side also expressed its readiness to support the implementation of new projects jointly with Korea Eximbank and Economic Development Cooperation Fund (EDCF) by speeding up the relevant procedures and processes, as well as promotion of a number of new projects planned for implementation with participation of Korea International Cooperation Agency.
Following the meeting, the sides agreed to intensify further cooperation to expand the portfolio of mutually beneficial arrangements for implementation of new investment projects and trade agreements that will have a positive effect on further development of relations between Uzbekistan and Korea. An agreement was also reached to hold the third meeting between the Deputy Prime Ministers of the two countries in September 2020.