Instructions were given on the development of industry in Tashkent region 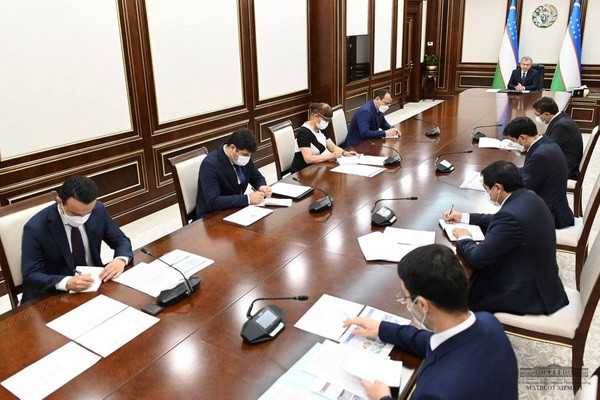 Tashkent, Uzbekistan (UzDaily.com) -- President of Uzbekistan Shavkat Mirziyoyev held a meeting on the development of industry in Tashkent region on 10 August.

At a video conference on the analysis of economic results for the first half of the year, held on 3 August, the President noted the presence in Tashkent region of favorable conditions for the development of industry and pointed out the need for breakthrough shifts in this direction. Accordingly, a plan for additional6 measures was developed.

In the first half of the year, the region produced goods worth almost 7.7 trillion soums, an increase of 4.6 percent. But this is below the national average. Taking this into account, the goal was determined to produce goods for 18 trillion soums by the end of the year and achieve an annual growth of 8.5 percent.

The main condition for achieving this indicator is the development of the region's industry through the implementation of new projects, support for low-power or idle enterprises, and the effective use of empty buildings. Transport and logistics, services, agriculture and construction are also priority areas.

At the meeting, a presentation of promising projects in these areas was held.

For example, 1,494 industrial enterprises operate in Zangiata district. In the first six months of this year, they produced goods worth about 600 billion soums. This year, 15 projects will be implemented with the creation of capacities for the production of goods for 51 billion soums.

Particular attention is paid to the project of creating an industrial center "Zangiota". It is planned to place 165 projects in this industrial zone with an area of 116 hectares. It is envisaged to create 12 thousand jobs, export products worth US million and substitute imports for US million.

The number of enterprises in the city of Angren is relatively small - 577, but they have great potential. The share of the city in the industry of Tashkent region is 28 percent. Over the first six months of this year, products worth more than 2 trillion soums have been produced here. Another 15 projects will be launched in the second half of the year.

In addition, 124 projects were formed for US0 million. As a result, it is planned to create 39 thousand jobs and production capacity for 3 trillion soums.

The meeting similarly considered the possibilities in all districts and cities of the region.

The President noted that the possibilities of Tashkent region are not fully used, it is necessary to implement more new projects in the industries, it is important to establish the production of value-added products. The task was set to increase the volume of industrial production in the region by 40 percent by the end of the year.

Instructions were given to expand the activities of factories, organize enterprises in areas with a low level of industrialization, and develop roadside services.