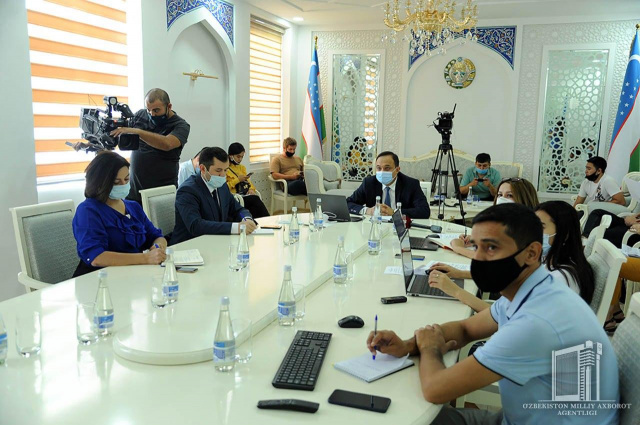 The Fifth Meeting of Ministers for Tourism of the Cooperation Council of Turkic Speaking States has taken place via videoconference.

The virtual meeting was attended by the Secretary General of Turkic Council Baghdad Amreyev, the Deputy Prime Minister of the Republic of Uzbekistan, Chairman of the State Committee for Tourism Development Aziz Abdukhakimov, the Minister of Culture and Tourism of Turkey Mehmet Ersoy, as well as the leaders of the tourism sector of the Turkic Council.
Heads of tourism administrations discussed the current state of the tourism industry in the context of the COVID-19 pandemic, the experience of the Council member states on revitalizing the tourism sector, measures to restore tourism exchange between the organization’s countries, as well as various projects and initiatives aimed at joint development and promotion of tourist destinations of the Turkic Council.
The Secretary General of Turkic Council expressed special gratitude to the leadership of the Republic of Uzbekistan for taking part in the Modern Silk Road project, which provides a system of ready-made tour packages on tourist cities of the organization’s member states.
At the same time, the Secretary General expressed confidence that the rich historical, cultural heritage and huge tourism potential of Uzbekistan will serve as an impetus for the implementation of multilateral tourism projects.
Within the framework of the security system “Uzbekistan. Safe travel guaranteed”, if tourists become coronavirus infected while traveling through Uzbekistan, they will be paid compensation in the amount of ,000.
Following the event, on the initiative of the Republic of Uzbekistan and with the support of all participants of the conference, an agreement was reached on holding the Sixth Meeting of Ministers for Tourism of the Cooperation Council of Turkic Speaking States 2021 in Uzbekistan.