Enhancing collaboration with the United States, EU and China discussed 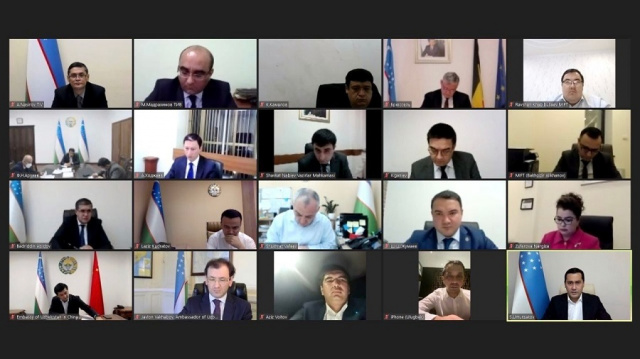 Deputy Prime Minister of the Republic of Uzbekistan, Minister of Investments and Foreign Trade Sardor Umurzakov has held a meeting on the issues of bilateral cooperation with the United States, the European Union and China, via videoconference.

According to the Ministry of Investments and Foreign Trade (MIFT), the meeting was attended by the leadership of the MIFT, the Ministry of Foreign Affairs, as well as heads of diplomatic missions of Uzbekistan in the PRC, the USA and the EU countries.
Issues of improving the bilateral legal framework with the United States were discussed, including through the signing of intergovernmental agreements on mutual protection of investments and the avoidance of double taxation, as well as the mechanisms for attracting leading U.S. companies to the implementation of investment projects in Uzbekistan.
The current state of the ongoing work on obtaining the status of a GSP+ beneficiary country by Uzbekistan was considered regarding the cooperation with the European Union, as well as practical mechanisms were developed to accelerate this process.
Main attention was paid to further steps for expanding trade and economic cooperation with China, the establishment of systematic work on attracting Chinese investors to the implementation of projects in Uzbekistan, including by organizing business forums in the PRC with presentations of specific investment proposals in priority sectors.
Following the meeting, responsible leaders and representatives of the diplomatic missions of Uzbekistan were given specific instructions to ensure the unconditional and timely implementation of the tasks.