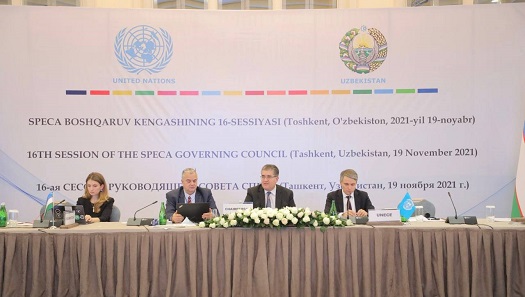 TASHKENT, November 22. /“Dunyo” IA/. On November 17-19, Tashkent hosted the SPECA Economic Forum on “Sustainable transport and trade for а green and inclusive economy after the pandemic”, as well as the 16th session of the Governing Council, reports “Dunyo” IA correspondent.

According to Uzbekistan MIFT, the SPECA Forum 2021 focuses on progress in developing sustainable trade and transport in the region and their contribution to a green, circular and inclusive economy.

The event was attended by the MIFT leadership, Deputy Executive Secretary of the UNECE Dmitry Maryasin, delegations of the SPECA member countries – Azerbaijan, Kazakhstan, Kyrgyzstan, Tajikistan and Turkmenistan, representatives of the UNRCCA, representatives and experts of the EU, EAEU, the SCO, the ECO, as well as other countries and organizations.

Deputy Prime Minister – Minister of Investments and Foreign Trade of Uzbekistan Sardor Umurzakov, UN Under-Secretary-General and UNECE Executive Secretary Olga Algayerova, as well as UN Executive Secretary of the Economic and Social Commission for Asia and the Pacific Armida Salsiah Alisjahbana addressed the plenary session of the forum via video messages.

The Uzbek side put forward several proposals, including the holding of the first meeting of the SPECA Working Group on Investment and Financial Cooperation in 2022 in Uzbekistan with the further transformation of this platform to strengthen regional cooperation and implementation of investment projects, development of an initiative to create a SPECA Fund to finance projects of cross-border economic and environmental cooperation, as well as the creation of the SPECA Secretariat to organize effective activities of the organization in the member countries.

The interest of Uzbekistan in developing cooperation through the creation of interregional value chains by deepening industrial cooperation, adopting a joint program for the development of industrial cooperation, encouraging mutual investments, promoting a program for the development of renewable and hydrogen energy, developing transport and transit potential in the region through the joint implementation of large logistics infrastructure projects, the introduction of uniform tariffs and cross-transport preferences was voiced.

Following the Economic Forum, the Tashkent Statement on Strengthening Transport, Trade and Connectivity in the SPECA Region to rebuild the green, circular and inclusive economy after the pandemic was adopted.