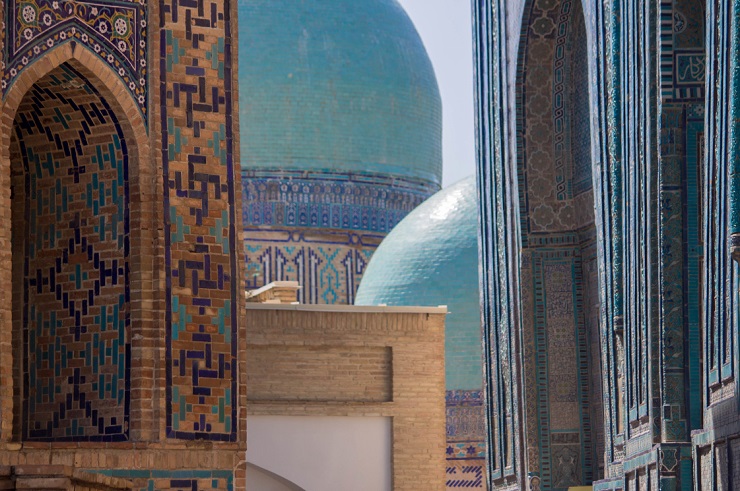 It is no longer a rare phenomenon to encounter road-trip tourists travelling to and through Uzbekistan. As the country has introduced a visa-free regime to 65 countries of the world, it is attracting more visitors willing to explore new destinations on the world map, like Josh Steinert and Charlie MacPherson. Bоth made their way from United Kingdom.

A recent graduates, they decided to hop on the road to use once in a lifetime opportunity and travel from England to Mongolia through Central Asia, making a stop in Uzbekistan. “We have just finished the studies”, says Josh. “And then you ask yourself what’s next. You either find a job or book a very long trip. This is how we got here”.

Charlie told me they were on the road for a month so far and still have three more weeks ahead until they reach Mongolia. “We drove into Uzbekistan through Turkmenistan and spent here one week”.

I didn’t know it until I met Josh and Charlie, but apparently there is a platform called “Carvanistan” that helps manage travelling to Central Asia. “There are around 600 cars taking similar trips. Using “Carvanistan” was helpful in navigating across the whole trip”, told me Josh.

“Quality of roads, however, was a major problem, especially between Khiva and Bukhara”, bоth exclaimed. Lucky for future travelers, the government of Uzbekistan took a bold step aimed at boosting its tourism sector.

On August 13, 2019, the President of Uzbekistan Shavkat Mirziyoyev signed a Decree “On measures to further develop the tourism area” that aims to create better conditions for those travelling within the country.

Certainly, it does consider improving the road system. In an interview with Nikita Makarenko, the journalist of “Gazeta.Uz” Aziz Abdukhakimov, Deputy Prime Minister of Uzbekistan shared his plan to cross the biggest travel destinations from Khanabad (Andijan region) to Muynak (Karakalpaskstan) by bus and indentify all the problems that needs to be fixed from road signs to infrastructure and the quality of roads.

Josh says as a native English speaker, a traveler finds it challenging to use menus in Russian language. From having first-hand experience he suggested adding the lines in English language.

The document is abundant with more promising goals to target various groups of tourists. Particularly, Uzbekistan is about to introduce “Open Skies” mode in its international airports in Karshi, Nukus, Termiz and Bukhara using the “fifth air freedom”.

There are three more major changes Uzbekistan wants to inject in its tourism sector - easing the procedures of production of audio-video product; encouraging local makhallas set-up their private tourism appealing businesses and opening up its doors to additional 20 countries, scaling up a total number of visa-free regime countries to 85.

That means the government is inviting all those passionate movie-makers and videographers to embrace the Eastern spirit. Moreover, it is ready to provide assistance; willing to give opportunity for local makhallas welcome more guests by transforming neighborhoods into tourism destinations and make Uzbekistan a liberal, visa-friendly country.

Authenticity is what concerns bоth tourists and government the most. Deputy Prime Minister ensured that no demolitions will occur. “The new decree doesn’t mean we are aiming to erase the authentic spirit of ancient cities”, he said to “Gazeta.Uz” Moreover, he encourages local businesses act on preserving the heritage by abandoning infamous alucobond styled renovations.

“Samarkand stood out for me the most”, shared Charlie. Josh added that he liked how Uzbekistan has been able to preserve cultural heritage in the country. “You don’t get to see an ancient buildings to be conserved this well in other countries”, he reinforced. “As a tourist you want to see something real. You don’t want to see a “Disneyfied” thousand year old mosque that you broke down and rebuild how it was”, added Charlie.

Whether you like Josh and Charlie planning a road trip or willing to book a flight, make sure to know that you are always welcomed in Uzbekistan.