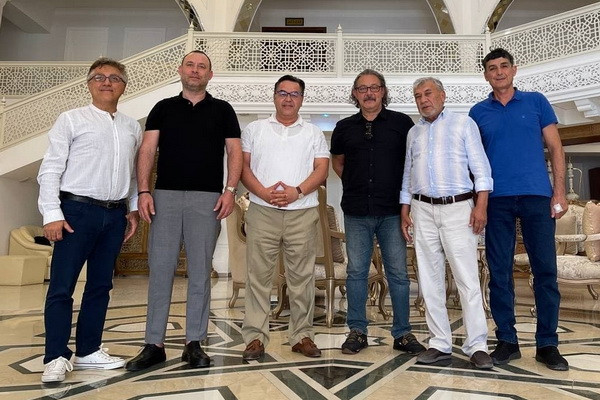 Tashkent, Uzbekistan (UzDaily.com) -- Today in Bukhara, the General Director of the Cinematography Agency Firdavs Abdukhalikov met with the head of the delegation of Turkish filmmakers, President of the TESIYAPDER Association of TV and Cinematic Films Producers, member of the Supervisory Board of YEKON, Vice-President of the Paris Association of Culture and Art Sami Dundar.

The delegation is staying in Uzbekistan on a visit under the motto: “Countries of the Turkic world: Uzbekistan - Turkey. Search for forms of cooperation and co-production in the film industry between countries”.

Within the framework of the meeting, the possibility of participation of the Turkish delegation of filmmakers at the Tashkent International Film Festival "Pearl of the Silk Road" was discussed. The issues of the composition of the delegation, the number and composition of films presented by the Turkish side at the Tashkent Film Festival were also discussed. The parties also agreed to develop a number of joint projects.

The meeting was also attended by the Chairman of the Board of X7-Telecom GmbH, President of the European Association of Independent Industrialists and Businessmen MUSIAD, General Director of "Dark Istambul Media A.Ş" Burhan Saglam, Member of the Board of Directors of the World Design Organization, President of the Professional Association of Industrial Designers, Chairman of the Board of Creative Initiatives, Member of the Executive Board of Design Turkey E. Sertak Ersain, Director of External Relations of the Film Festival of Documentary Films of the Turkic World, coordinator of the Association of Cinematographers of the Turkic World Bayram Bayrammukhamedov, and Director of Bukhorilar LLC Ulugbek Abdullaev.

At the end of the event, the guests made a tour of the cinemas of Bukhara and saw the sights of the city.