SHAVKAT MIRZIYOYEV: BUKHARA REGION SHOULD TURN INTO A MODEL IN ADDRESSING WOMEN'S ISSUES 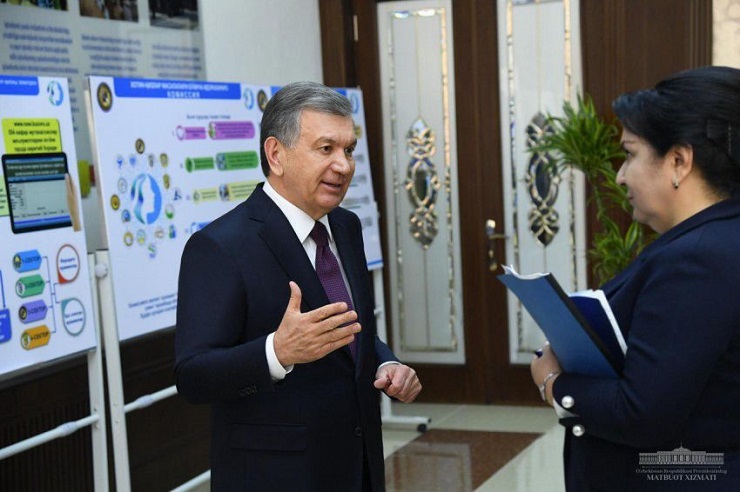 As part of his trip to the Bukhara region, President of the Republic of Uzbekistan Shavkat Mirziyoyev has visited Tarakkiyot mahalla citizens’ assembly in Kagan district.

The assembly building was built on a new design, and it is home also to the Kagan regional council for the coordination of the activities of citizens’ self-government bodies. Among the innovations in the complex is the Center for Social Adaptation of Women, designed to provide moral and psychological assistance, medical and legal aid to women and children in periods of difficulty.

A modern library housed in a spacious hall, whose electronic base is connected to that of the Alisher Navoi National Library of Uzbekistan, serves as a hotbed of enlightenment for the public, especially young people. Two football pitches with artificial turf along with a gym are behind the building of the mahalla center for the entertainment and useful leisure of the local children and young men.

The citizens’ assembly also has a modern room of internal affairs, which the other day was recognized as the best in the country and awarded the Nexia 3 sedan.

President Shavkat Mirziyoyev said that more than 35 thousand women in the Bukhara region are currently unemployed, and female crime is observed in the province.

The head of our state pointed out that this situation is alien to our national mentality and is absolutely not suitable for Bukhara, which has a rich history and enormous potential.

“Until the end of this year, we should solve the social problems of women, employ them, take the necessary measures so that they do not commit crimes, and turn the Bukhara region into the most exemplary region where all issues that concern women are effectively addressed,” Shavkat Mirziyoyev urged.

The head of state said that to this end, the Women’s Committee, the Oila Scientific and Practical Center, the mahalla and the internal affairs bodies should closely cooperate, talk with each woman and provide the needed assistance when problems are identified.

The President suggested that divorces become the cause of many problems, including crimes by women, and that for their prevention it is important to bolster the responsibility of young people and parents, and improve the relevant legislation.

Shavkat Mirziyoyev spoke with the staff of the mahalla center and young members of the intellectual club set up here.