President of Uzbekistan: The greatest drawback in the execution system is a stale worldview, negligence and irresponsibility 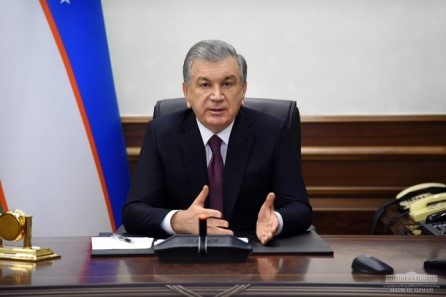 According to the Press Service of the President of the Republic of Uzbekistan, in his Address to the Oliy Majlis on 29 December 2020, President Shavkat Mirziyoyev noted the need to ensure the timely and effective implementation of normative acts, so that every person in the country feels the results of reforms in life. The Ministry of Justice was instructed to introduce a new system for communicating the adopted acts to the responsible executives, assisting in their implementation and monitoring their execution.

At today’s meeting with the President, the current situation in this area was analyzed and proposals were considered for delivering an effective execution system built on advanced international experience.

Over the past 4 years, it was noted, the President adopted about 2 thousand decrees and resolutions. But their implementation in regions and organizations remains unsatisfactory.

The coronavirus pandemic and preparations for the fall-winter season have revealed problems in a number of areas. Reforms in higher education, transport, water management, state property management are stalled and have barely produced the expected results. Consequently, top executives of these spheres were recently dismissed from their posts. The activities of individual ministers and deputy ministers were deemed disappointing and disciplinary measures were taken accordingly.

“The greatest drawback in the execution system is a stale worldview, negligence and irresponsibility,” Shavkat Mirziyoyev told the meeting participants.

To facilitate the practical execution of acts, deputy ministers of justice will be assigned to central organizations. Training will be arranged for middle and lower level executives in relevant areas. The heads of regional justice departments, town and district offices of justice will be responsible for explaining the documents to entrepreneurs and citizens.

The head of our state noted that the presidential acts are focused on the interests of the people, therefore they need to be brought to the attention of the general public.

Particular attention will be paid not only to the execution, but also to the effectiveness of the documents. For example, on 1 May 2020, a resolution was adopted on the construction of wells at the expense of the state in areas with groundwater reserves and their provision to the population on preferential terms. For this, 300 billion soums were allocated from the Anti-Crisis Fund, 95 thousand hectares of land were re-mastered, about 70 thousand new jobs were created.

At the meeting, responsible officials were instructed to conduct a targeted and thematic on-site study of the implementation of documents. Every standing issue will be studied comprehensively – from shortcomings in legislation to the state of investment projects, and in case there are problems, proposals for their elimination will be developed.

The most effective means of monitoring the execution of decisions are public participation and public oversight. In this regard, the importance of introducing a system of public hearings and public control, active engagement of civil society institutions, mass media and citizens in this process was emphasized. It is planned to launch a mobile application that will allow individuals and corporate entities to send appeals with regard to the execution of presidential acts.

The Ministry of Justice was tasked with conducting public opinion polls, jointly with the National Association of Nongovernmental Nonprofit Organizations and the Ijtimoy Fikr Center, and examining the implementation and reaction of citizens to the execution of decisions. For these purposes, special grants will be introduced.

In addition, government bodies will organize press conferences on the course of realization of presidential acts. Media coverage will include reports with a critical discussion of outstanding tasks as well as the positive experience in the effective execution of acts.

The results of the analytical work and the information collected will be critically reviewed by the Presidium of the Cabinet of Ministers with further determination of appropriate measures.