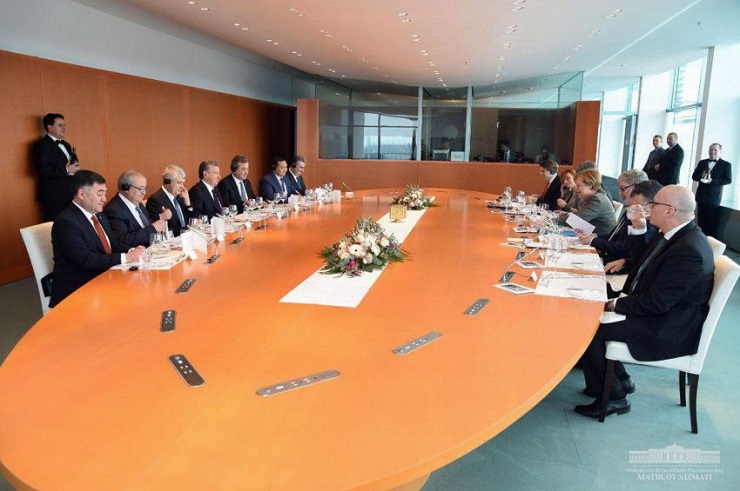 On January 21, the President of the Republic of Uzbekistan Shavkat Mirziyoyev held negotiations with the Federal Chancellor of Germany Angela Merkel.

At the meeting, the President of Uzbekistan thanked the Chancellor for the invitation and warm hospitality extended to Uzbekistan delegation. It was emphasized that in Germany, Uzbekistan sees a reliable and time-tested partner.The similarity and closeness of positions on key issues of international and regional agenda was noted. The mutual desire was expressed to continue a fruitful dialogue in bilateral and multilateral formats, including within the framework of authoritative international organizations.The Chancellor highly appreciated the reforms carried out under the leadership of the President of Uzbekistan, aimed at a radical modernization of the national economy and further democratization of society.She welcomed the new regional policy of Uzbekistan on creating in Central Asia the atmosphere of friendship and mutual trust, peaceful resolution of perennial disputes and integration of the region into the global economy.The parties also considered issues of protection of human rights, as well as environmental protection. The Head of the state thanked the Government of Germany for the assistance in overcoming negative consequences of the Aral Sea disaster, calling for active participation of Berlin in activities of multi-partner Trust Fund for the Aral Sea region.Security cooperation, including taking into account the Afghan problem was considered at the meeting. Necessity of its peaceful settlement with participation of all parties to the conflict and under the leadership of the Afghans themselves was emphasized.Main attention at the meeting was paid to the issues of development of trade-economic, investment and technological cooperation.Shavkat Mirziyoyev noted that Uzbekistan sees in Germany, which is a world power with a huge economic potential, one of the key partners in technology and investment.The parties, noting the dynamic expansion of bilateral trade, which amounted to more than 700 million euros, emphasized the presence of all the possibilities for growth of this indicator to 1 billion euros.132 enterprises with participation of investors from Germany are operating in Uzbekistan, including 33 enterprises with 100% German capital, representative offices of 31 companies. The National Bank of Uzbekistan has established correspondent cooperation with 57 German banks. Deutsche Bank’s branch operates in Tashkent.It was noted with particular satisfaction that during the visit, agreements were reached on implementation of new multi-billion-dollar projects in partnership with Germany’s world-class companies: Siemens, Thyssen Krupp, Klaas, MAN, Knauf, Linde, Pappenburg, Humana, Volkswagen – leading in chemical, construction, energy, metallurgical and food industries.The importance of developing cooperation in science and education, expanding cultural ties and tourist exchanges was emphasized.It was noted that more than 8 thousand ethnic Germans live in Uzbekistan. Conditions for development of their national culture and traditions are created. There are over 400 thousand students in the country who are learning German. Recently, schools in Tashkent, Samarkand and Bukhara were named after great scientists and thinkers of German culture.Activities of the Goethe-Institute in Tashkent, representative offices of the Konrad Adenauer and Friedrich Ebert foundations, the German Academic Exchange Service, and other German non-governmental organizations contribute to strengthening cultural-humanitarian ties. Vidergeburt German cultural center operates in Tashkent and several regions, as well as Uzbekistan – Germany friendship society.Uzbekistan has introduced a visa-free regime for German citizens arriving for up to 30 days. This will create additional amenities for German tourists and investors who are showing interest in Uzbekistan.During the visit, 9 intergovernmental and interdepartmental documents were signed in the spheres of economy, trade, finance, education, science and innovations.Following the meeting, the parties confirmed their mutual interest in further developing and deepening bilateral relations for the benefit of the two countries and people.