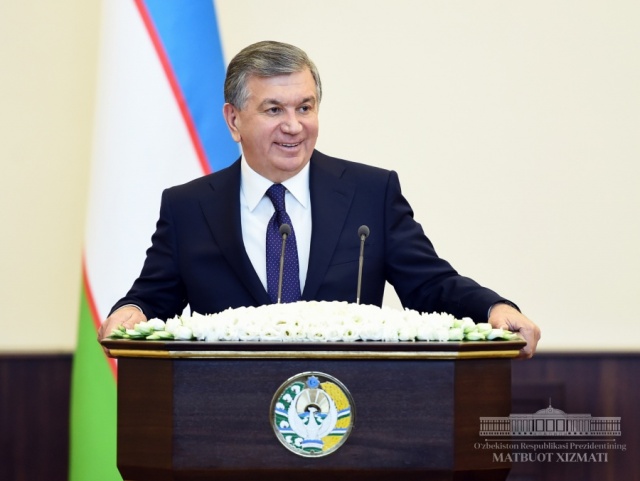 On January 10, 2018, President of the Republic of Uzbekistan Shavkat Mirziyoyev visited the military unit in Chirchik.

Systemic activity on educating youth in the spirit of patriotism is carried out in this military unit, which was reorganized by the Decree of the President of December 12, 2017.

The President of the Republic of Uzbekistan, the Supreme Commander-in-Chief of the Armed Forces Shavkat Mirziyoyev got acquainted with conditions created in the military unit, material resources for combat training, supplies, and talked with military personnel.

Shavkat Mirziyoyev was informed about the “road map” on organization of the military administrative sector of Tashkent region in 2018, the concept of patriotic education of youth, structure of primary organization of the Union of Youth of Uzbekistan in the Ministry of Defense, encouraging young military personnel and other plans for the future.

The Head of our state, becoming acquainted with the outfit of military servicemen, indicated the need for their modernization and improvement of the supply system, gave instructions on creating all conditions for exemplary military personnel, providing them with houses and cars.

The President of our country visited the military unit canteen, got acquainted with conditions created here.

President of our country got acquainted with the program of development of agricultural machinery.

Large-scale work is being carried out in our country on further improving activities of agricultural machinery enterprises. Measures are being taken on modernization, technical and technological re-equipment of production, organization of modern and competitive machinery and equipment production for the agricultural sector.

The Head of our state was provided with information on plans for production of resource-saving and high-performance agricultural machinery and means of mechanization.

It is planned to implement 3 projects worth 32,7 million dollars in 2018-2019, in Chirchik agricultural machinery plant. It is envisaged to bring the level of localization of products to 50 percent.

The project is aimed at providing machine-tractor parks and farms with new types of agricultural machinery – modern combines for harvesting grain and hay, cotton and grain seeders, equipment for soil cultivation, sowing and potato harvesting.

The Head of our state got acquainted with samples of agricultural machinery, which is planned to be produced within the framework of the project. It was noted that in the current growing competition in the world market, products should be provided not only in the domestic market, but also be competitive and export-oriented in the foreign market.

The President of our country visited “Oil, gas and chemical machinery plant” JSC, got acquainted with projects on organizing new foundry and production of large-sized equipment.

The plant produces heat exchangers for the oil and gas, chemical and food industries, compressors, pumps, equipment for oil and gas processing, drilling, air cooling, components and others.

Products of the enterprise are supplied to “Muborakneftgas”, “Shurtanneftgas” joint-stock companies, Shurtan gas chemical complex and other large industrial enterprises, as well as exported to Russia, Kazakhstan, Belarus, Ukraine.

Last year, the volume of exports of the enterprise amounted to 1,5 million dollars, this year it is planned to bring this figure to 2 million dollars.

To this end, it is planned to build a new modern foundry. As a result of implementation of this project at a total cost of 18,9 million dollars, the volume of production of foundry products of various nomenclature will be brought from the current 1,7 thousand to 4 thousand tons per year. The foundry will be equipped with technologies produced in Europe and the USA. It is scheduled to be launched in the third quarter of 2019.

The Head of our state got acquainted with samples of products of “Oil, gas and chemical machinery plant” and Chirchik transformer plant, noted that such projects are of great importance in expanding the assortment of production and volumes of export.

Presentation of a number of programs and projects aimed at socio-economic development, improving welfare of the population was also held here.

There are more than 300 industrial enterprises in Chirchik. About 80 projects will be implemented within the framework of the economic development program of the city for 2018-2019. As a result, the volume of production will increase 1,6 times, about 3 thousand jobs will be created.

Construction of three seven-storey houses was completed last year according to the general plan of the city, envisaged to be implemented until 2035. 5 more houses, and in the next – 10 similar houses will be built this year. In addition, 8 three-story houses for military personnel will be commissioned in March 2018, and 10 until the end of the year.

Chirchik dehkan market was erected in the 50s of the last century and today has ceased to meet modern requirements. It is planned to reconstruct the market in order to create broad amenities for entrepreneurs and the public. As a result of implementation of this project worth almost 22 billion sums, a new market will be built in an area of 3,7 hectares, which will accommodate a three-story hypermarket, pavilions of agricultural products, shopping arcades, car parking, bus stops (currency rates of CB RU from 11.01.2018, 1$= 8139,00  soums).

In addition, the “Oil, gas and chemical machinery plant” is planning to reconstruct “Mashinasozlar” park with an area of 2,5 hectares and put the renewed park into operation on the eve of Independence Day celebrations this year.

The embankment of Bozsu canal will be landscaped, alleys will be established here.

One of the promising projects is organization of movement of modern high-speed trains on Tashkent – Khodjikent route, implementation of which will become one of the important factors for improving the well-being of the population and the tourism potential of Tashkent region. To this end, “Chirchik” and “Bozsu” railway stations will be modernized.

The President of our country noted that Chirchik is one of the largest industrial centers of our country in terms of its capabilities and potential, that’s why in each project it is necessary to pay special attention to diversification of production and improvement of living conditions of the population. The Head of our state gave appropriate instructions on increasing the effectiveness of projects.

Essence and significance of reforms taking place in the city, increasing welfare of the population, educating youth were discussed at the meeting with employees and experts of the enterprise, public representatives, veterans and youth that was held at the assembly hall of the plant.

This process was carried out on the basis of continuity of glorious military traditions of Tashkent Higher Combined Arms Command School and the use of advanced experience of leading scientific educational institutions of Uzbekistan and foreign countries.

The Academy is the center of military science, occupying a key place in the single system of military education in our country. The Academy carries out training of lieutenants, advanced training of officers, and special training of commanders of the administrative staff of the army. Combined arms, command and staff faculties, the faculty of advanced training, 11 departments are operating here. Cadets and listeners are trained in military, humanitarian, and exact sciences.

The latest teaching methods and technologies has been introduced at the academy, which has acquired a modern look. Auditoriums are equipped with modern training, educational and laboratory equipment and computers.

The President got acquainted with conditions that are created here, and examined the study rooms, museum, canteen, bedrooms of cadets, observed the learning process.

We must create all conditions for further enhancement of professional skills, intellectual level, culture of listeners of the academy, said Shavkat Mirziyoyev. At the same time, special attention should be paid to introduction of modern methods, training of highly intelligent personnel.

Graduates of “Temurbeklar maktabi” (“Temurbek’s school”) organized on the initiative of the President of our country will also continue their education in the Academy and will become qualified officers in the future. In addition, training of the teaching staff for all the higher military schools of the country has been established here, including internships in leading higher education institutions abroad.

The Head of our state talked with listeners and cadets, congratulated them on the 26th anniversary of the Armed Forces and noted that they should be worthy of great ancestors and deeply master modern knowledge.

Shavkat Mirziyoyev visited the situation center of the Academy of the Armed Forces. The Head of the state took part and delivered a speech at the expanded meeting of the Security Council under the President of the Republic of Uzbekistan.