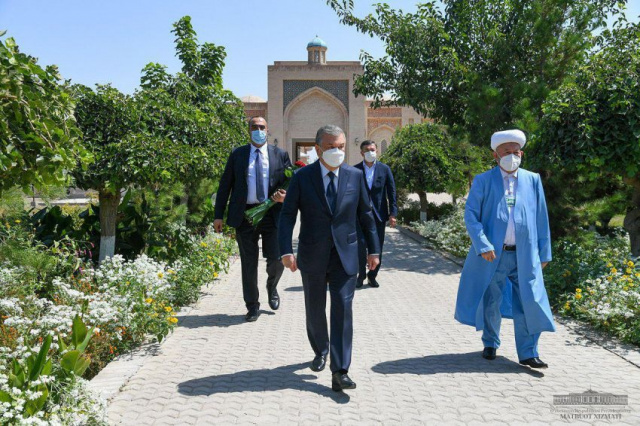 Residents of Bukhara region have suffered a great loss. On August 22, the acting hokim of the region, state and public figure Karim Jamolovich Kamalov passed away at the age of 65.

The deceased was buried in Hazrati Imam cemetery in the city of Bukhara.
On August 23, President of the Republic of Uzbekistan Shavkat Mirziyoyev visited the grave of Karim Kamalov. Surahs from the Quran were recited in tribute to the late politician.

During his 47-year career, Karim Kamalov earned great respect as a person with leadership abilities and noble human qualities, made a significant contribution to comprehensive development and improvement of Bukhara.
Karim Kamalov was born in 1955 in the city of Bukhara. He graduated from Bukhara Technological Institute of Food and Light Industry, started working in the construction sector. From 1994 to 2007, he worked as Bukhara city’s hokim. During this time, unprecedented creative work has been carried out here, the socio-economic spheres have been consistently developed. The 2500th Anniversary of the city was widely celebrated, international festivals were successfully held. Ancient monuments have been restored and tourism infrastructure has improved.
Rich knowledge and experience of Karim Jamolovich were clearly demonstrated when he was the Chairman of LLC 20-trust in 2007-2017.
Large-scale reforms taking place in the region in recent years are also associated with fruitful work of Karim Kamalov. Holding the position of hokim of the city of Bukhara since 2017, and then acting hokim of the region since February 2020, he selflessly worked for the implementation of reforms in the country. Working with members of the regional and city councils of people’s deputies, he contributed to development of important decisions that serve the socio-economic development of the region.
Karim Kamalov’s great service to the state and people were duly appreciated and he was awarded the Dustlik and Mehnat Shuhrati Orders.