President of Uzbekistan: Our people are proud of soldiers and officers who have dedicated their lives to protecting the Motherland 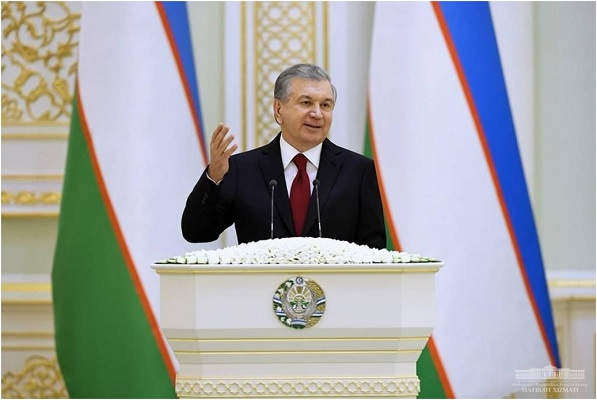 TASHKENT, January 15. /“Dunyo” IA/. Yesterday, a group of military personnel, law enforcement officers have been awarded the military ranks, orders and medals by the decrees of the President of the Republic of Uzbekistan on the occasion of Defender of the Motherland Day and the 29th anniversary of the Armed Forces of the Republic of Uzbekistan, reports “Dunyo” IA correspondent.

According to the Press Service of the President of the Republic of Uzbekistan, the Head of the state, Supreme Commander-in-Chief of the Armed Forces congratulated the participants, as well as all the military servicemen of Uzbekistan and their families on the holiday.

Addressing the ceremony, President Shavkat Mirziyoyev noted that our people are proud of soldiers and officers who have dedicated their lives to protecting the Motherland, proving it in practice every day, every minute. The country is well aware of and appreciates the great contribution they have made, in addition to fulfilling their official tasks, contributed to the courageous overcoming of difficulties that fell to a lot of people last year.

As is known, large-scale reforms are also being carried out in the military sphere to further strengthen the independence of Uzbekistan, reliably protect peaceful life and inviolability of the state's borders.

The army and the people were not united before. The situation changed radically after President Shavkat Mirziyoyev, from the first days of his activity as the Head of the state, forwarded the important idea that the people and the army are united.

It was noted that the doors of military units should always be open to people, to the young generation – future defenders of the Motherland.

At the same time, much attention is paid to the education of a new generation of military personnel devoted to the ideas of independence and patriotism. The main goal in this process is to provide soldiers and officers with modern knowledge, perfect command of military equipment and technologies, and their military-patriotic education.

“The army is strong not only with weapons and equipment but also with the military – soldiers, officers, generals who do not spare themselves for the sake of the Motherland”, the President noted. – This is the main factor determining the capabilities and combat potential of our armed forces.

It was emphasized that today there are still threats and challenges to peace and tranquility, conflicts are still taking place in various parts of the world. This situation, of course, worries the whole of humanity and our people in particular.

A person must have true patriotism, high knowledge and thinking and a strong will to adequately confront these risks.

“This is what our great commander Amir Temur meant when he said: “The country is strong, whose warriors are brave”. I have repeatedly noted that every soldier, every defender of the Motherland should know deeply the Code of Amir Temur and our great generals, their military art. This immortal and priceless heritage still fills our hearts with immense pride, strengthens the sense of devotion to our sacred land”, President Shavkat Mirziyoyev stressed.

The ceremony was also attended by employees of the Ministry of Emergency Situations, the State Security Service, National Guard, customs and internal affairs agencies.

The Supreme Commander-in-Chief cordially congratulated all our servicemen who were awarded high orders and medals of the state, who today accept these awards across the country.

The awardees sincerely thanked the President for the high attention and support provided to the military and their families.