On telephone conversation of Presidents of Uzbekistan and the USA 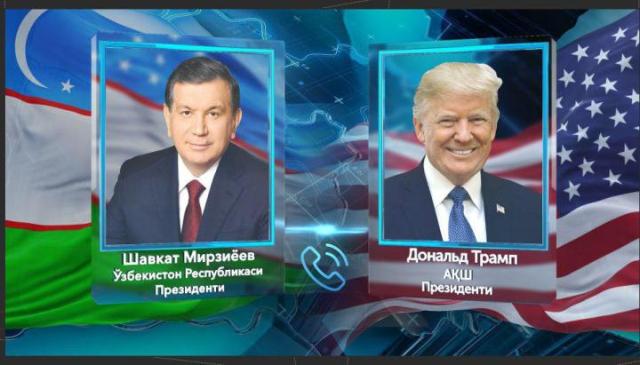 As reported by the Press Service of the President of the Republic of Uzbekistan, the heads of the two states discussed the state and prospects of multifaceted cooperation between Uzbekistan and the USA.

The meetings of the leaders of Uzbekistan and the USA in Ar Riyad in May 2017 and in New York in September this year contributed to a notable increase in cooperation in politics and security, trade, investment, finance, technological and cultural-humanitarian exchange.

The Head of our state expressed sincere gratitude to President Donald Trump for the cordial welcome extended during the stay of delegation of Uzbekistan in the USA for participation at the 72nd session of the UN General Assembly, as well as for the warm welcome message and support for the business forum, unprecedented in its scope, organized with the American – Uzbekistan Chamber of Commerce.

In turn, the President of the USA expressed his deep respect for people of Uzbekistan and his sincere admiration for their hardworking. He again expressed support for the new stage of democratic and economic reforms being implemented in Uzbekistan aimed at strengthening the foundations of civil society, ensuring the rule of law, liberalizing the economy and improving the welfare of the population.

Views were exchanged on current international and regional issues of mutual interest.

Main attention was paid to issues of ensuring regional security, peaceful settlement of the situation in Afghanistan, the fight against international terrorism, extremism and radicalism.

The President of the USA welcomed the open and constructive foreign policy and active efforts of Uzbekistan on development of good neighborly relations and strengthening cooperation with the countries of the region, contributing to strengthening of peace and stability in Central Asia.

The heads of states emphasized the importance of broad international support for the economic reconstruction of Afghanistan. In this regard, the agreements on implementation of specific projects, reached during the recent visit of the President of Afghanistan to Uzbekistan, were highly appreciated.

Presidents of Uzbekistan and the USA underlined their commitment to further strengthening bilateral relations of strategic partnership on the principles of mutual respect, trust and taking into account each other’s interests.

President Donald Trump invited the Head of our state to pay an official visit to the United States in order to jointly consider the long-term plans for expanding bilateral cooperation.

Following the conversation, the leaders of the two countries exchanged greetings and good wishes on the occasion of the upcoming 2018.