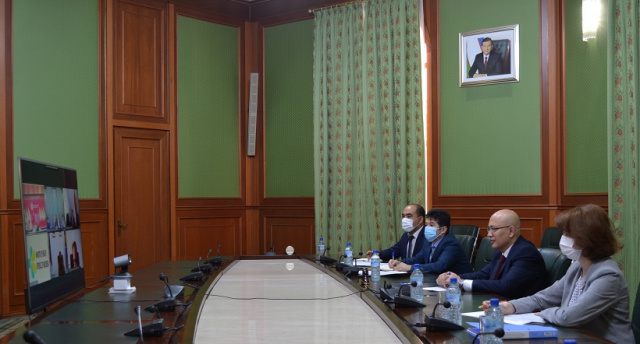 On July 23, 2020, the eighth round of political consultations between the Ministries of Foreign Affairs of Uzbekistan and Indonesia took place via videoconference, Uzbekistan MFA reports.

The delegation was led by Deputy Minister of Foreign Affairs of Uzbekistan Furkat Sidikov and Director General for Asia, Pacific, and Africa at the Indonesian Ministry of Foreign Affairs Desra Percaya.
During the talks, the parties exchanged views on the state and prospects for development of Uzbekistan – Indonesia relations in political, trade-economic, investment, cultural-humanitarian and other spheres, discussed priority areas of cooperation within the framework of international organizations and structures.
They expressed interest in giving a systematic character to interstate political dialogue in order to bring cooperation to a qualitatively new level. In this context, issues of expanding the legal framework for activation of bilateral relations were considered.
Mechanisms for strengthening trade-economic and investment cooperation were discussed in detail. The urgency of taking mutual practical measures to increase the volume and expand the range of mutual trade turnover, current indicators of which do not correspond to the existing potential of the parties, was noted.
Special attention was paid to organizational aspects of holding the next meeting of Uzbekistan – Indonesia Intergovernmental Commission on Economic and Technical Cooperation in the second half of this year.
Heads of delegations noted the dynamic nature of relations in tourism and noted the importance of creating conditions for development of pilgrimage and halal tourism.
Cultural-humanitarian interaction, in particular, organization of joint events in the context of a pandemic, was considered.
Development of cooperation between higher education institutions of the two countries was noted with satisfaction, including the planned opening of Bogor Agricultural University Research Center at Tashkent State Agrarian University. They expressed their readiness to continue active work in this direction.
The sides also exchanged views on other issues of mutual interest.