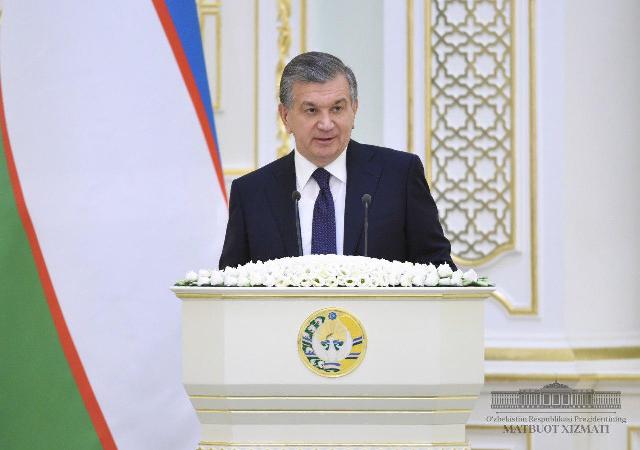 It was attended by the heads of diplomatic missions of Uzbekistan abroad, representatives of the Administration Office of the President of the Republic of Uzbekistan, members of the government, heads of state and economic administrations, regional khokims, as well as senior officials of the Ministry of Foreign Affairs and several other ministries and departments.

As it was noted during the event, significant results have been achieved in the past period in implementing a balanced and constructive foreign policy, developing friendly and mutually beneficial relations with foreign countries, primarily with neighboring countries.

Consistent implementation of the principle of “The main priority of foreign policy of Uzbekistan – Central Asia” has allowed to create a completely new political atmosphere in the region, to strengthen interrelations based on trust and good-neighborliness, and on this basis to solve a number of important issues related to water use, borders, renewal and expansion of transport communication.

Significant stimulus has been given to further development of mutually beneficial cooperation with Russia and other CIS countries, China, the United States, South Korea, Turkey, a number of European and Asian states. Partnership with the UN, the OSCE, the SCO, the OIC and other authoritative international organizations has reached a qualitatively new level.

Cooperation with international financial institutions is strengthening. The office of the European Bank for Reconstruction and Development was reopened in Tashkent. The work with International Monetary Fund, the World Bank, ADB, IDB, and the Asian Infrastructure Investment Bank has been developed in a new way.

In 2017, more than two hundred international treaties, agreements and contracts were signed in trade, economic and investment spheres for the amount of about sixty billion dollars.

It was emphasized that the Ministry of Foreign Affairs played an important role in this activity.

At the meeting, priority tasks for 2018 and the near future were also identified based on a critical analysis of the results of activities of the Ministry of Foreign Affairs and its agencies, diplomatic missions of our country abroad in 2017.

The President of our country emphasized that in the Year of supporting active entrepreneurship, innovative ideas and technologies, it is necessary to radically improve the effectiveness of the Ministry of Foreign Affairs in all areas. First of all, this is the promotion of export of domestic enterprises’ products, attraction of foreign investments, advanced technologies and knowledge for modernization of industry and infrastructure, active work on increasing the flow of tourists to Uzbekistan. It requires active involvement of ambassadors and all diplomats in implementation of a new course of reforms in the country.

Shavkat Mirziyoyev emphasized the need for cardinal revision and optimization of the ambassadors’ activities in foreign countries, improvement of the organizational and staff structure of the ministry and its agencies, active introduction of modern information technologies into the sphere.

The established Commission on critical study and radical improvement of activities of the Ministry of Foreign Affairs and embassies under the leadership of the State Advisor O. Muradov is to give an objective assessment to each employee of the MFA system, analyze the existing shortcomings and introduce concrete proposals on their elimination.

Importance of establishing specialized units in the Ministry of Foreign Affairs dealing with issues of developing foreign economic relations, increasing exports and attracting investments, broad promotion of tourism potential of our country, coordinating activities of intergovernmental commissions as a secretariat, working with compatriots and our citizens abroad was noted. At the meeting it was also noted that new tasks require formation of an effective system of legal regulation of the diplomatic service.

Practical activities of each diplomatic institution of our country abroad was thoroughly considered and critically evaluated, clear guidelines for foreign policy activities for the forthcoming period were outlined.

The Head of our state proposed to assign specific regions of the country and economic sectors to each embassy. Now each ambassador will start his working day from a telephone conversation with regional khokims and heads of industries, for which he is assigned. Issues related to implementation of specific investment projects, promotion of domestic products in the foreign market and of the country’s tourism potential, strengthening business cooperation will be addressed in the operational mode.

In turn, khokims of the regions should visit respective countries at least twice a year in order to study best practices in the spheres of urban development and improvement, infrastructure development, introduction of information and communication, energy-saving technologies, industry and agriculture, education and health.

At the meeting special attention was also paid to the importance of establishing a clear and effective system of interagency cooperation of the Ministry of Foreign Affairs and its diplomatic missions with the involved ministries and departments, executive authorities at places.

The President of our country pointed to the lack of systematic and targeted information and propaganda activity, primarily in foreign countries. Partners abroad are still not sufficiently aware of cardinal changes and reforms implemented in Uzbekistan, priorities of domestic and foreign policy, new favorable conditions for business and investment.

In this regard, the Head of our state suggested establishment of a modern media center on the basis of “Jahon” news agency, equipping it with the most advanced technology and employing young literate specialists, as well as creating a separate public relations and mass media department in the central administration office of the ministry.

Special attention was also paid to the need of further improving the system of training diplomatic personnel, the quality of training at the University of World Economy and Diplomacy, educating prospective, dedicated young professionals. It was emphasized that implementation of the identified priorities is an important condition for success of large-scale reforms.

At the meeting, relevant instructions were given on increasing effectiveness of activities of the Ministry of Foreign Affairs, diplomatic missions of our country abroad.