ATTRACTING FOREIGN INVESTMENT, PROMOTING EXPORT OF UZBEK PRODUCTS ABROAD, INCREASING THE NUMBER OF TOURISTS IN THE COUNTRY - THE MAIN TASKS OF THE DIPLOMATIC MISSIONS OF UZBEKISTAN ABROAD 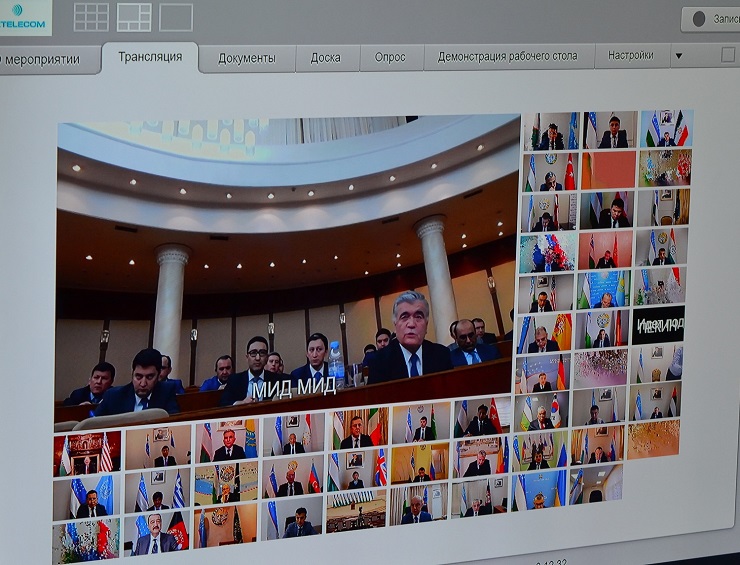 On 27 December 2018 First Deputy Minister of Foreign Affairs of the Republic of Uzbekistan Ilhom Nematov held a video-conference at the Ministry of Foreign Affairs, which summed up the activities of the Ministry and diplomatic missions abroad in fulfilling the guidelines of the President Shavkat Mirziyoyev on attracting foreign investments into the economy of the country, promoting and expanding the export volumes, increasing the tourist flow to Uzbekistan. The priority activity areas for 2019 had also been identified.

The meeting had been attended by heads of diplomatic missions of Uzbekistan abroad via online video facilities.

The meeting critically reviewed the activity of the MFA headquarters and representations overseas.

Besides, it was noted that despite the existing shortcomings associated with interministerial cooperation, the lack of quality project and commercial proposals, as well as the presence of a number of technical barriers, most of the diplomatic missions were able to demonstrate positive indicators in these three foreign economic activities.

It had been emphasized that the head of state pays great attention to the effectiveness of foreign economic work of representations overseas. For example, during recent visits to Karakalpakstan, Khorezm and Kashkadarya provinces the President of Uzbekistan personally heard reports from our country's ambassadors to China, Japan, Iran, the Republic of Korea, Kuwait, Malaysia, Poland, Saudi Arabia, Turkmenistan and the United Kingdom. He gave specific instructions to strengthen the work to attract foreign investments as well as financial and technical assistance to the districts of these provinces.

In order to increase exports of Uzbek products, the missions abroad have been undertaken a consistent work, including:

- constant activity on analyzing the market of the host country, the existing tariff and non-tariff barriers;

- close cooperation with quarantine authorities had been established to remove quarantine restrictions of foreign countries on the import of fruits and vegetables from Uzbekistan;

- a comprehensive assistance is rendered to Uzbek exporters in promoting their goods in foreign markets, their participation in exhibitions and fairs abroad, the signing of firm-order export contracts;

- a widespread awareness activity have been undertaken to promote domestic goods abroad under the brand “Made in Uzbekistan”;

- participation of 165 representatives from 24 foreign countries in the First International Export Fair “Made in Uzbekistan” on 27-30 November 2018 in Tashkent was ensured;

- targeted activity to promote export from the provinces of Uzbekistan affiliated to diplomatic missions have been undertaken.

In 2018 the Foreign Ministry and diplomatic missions carried out consistent work aimed at increasing the number of inbound tourists.

In 2018 in order to increase the tourists flow, a visa-free procedure had been introduced for citizens of 9 countries, including France, Indonesia, Israel, Japan, Republic of Korea, Malaysia, Singapore, Tajikistan and Turkey. Today, the total number of visa free countries to visit Uzbekistan - 18.

Over the last year, representations overseas held over 250 presentations of the tourism potential of Uzbekistan. Diplomatic missions participated in more than 50 tourist exhibitions held abroad. Publications in foreign print and electronic Media, as well as a demonstration of 1.2 thousand materials about the tourist potential of Uzbekistan on foreign TV-channels had been arranged.

Considerable work has been carried out in order to promote “Ziyorat tourism”.

Throughout 2018 the Ministry of Foreign Affairs together with diplomatic missions abroad had successfully held 23 meetings of the Intergovernmental Commissions (IGC) and subcommittees.

Since the beginning of 2018 the IGC meetings had been held with Russia, Kazakhstan, Tajikistan, Turkmenistan, Georgia, China, EU, USA, Japan, Vietnam, India, France, Germany and Iran, which discussed practical issues of developing cooperation in trade, economy and investments.

The video-conference held in the MFA also heard reports from a number of ambassadors of Uzbekistan abroad. It has been indicated that there are: insufficient targeted work has been done by the MFA headquarters and its diplomatic missions to attract foreign investment, promote exports and increase inbound tourism in the provinces of Uzbekistan affiliated to the diplomatic missions in order to ensure their accelerated socio-economic development; untimely execution of signed documents; poor control over the implementation of the approved roadmaps; as well as the lack of systemic coordination between the economic agencies of Uzbekistan and the Ministry of Foreign Affairs. The heads of diplomatic missions have been tasked by the specific goals to implement the instructions of the head of our state to intensify the foreign economic activity of the Foreign Ministry and missions abroad in 2019.