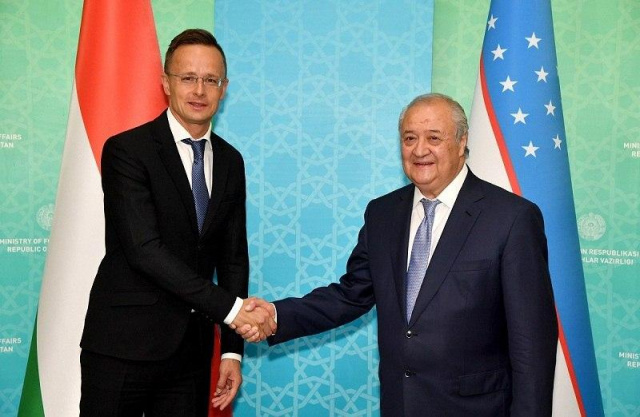 At the meeting, views were exchanged on prospects of Uzbekistan – Hungary relations in political, trade-economic, investment, cultural-humanitarian and other spheres, as well as within the framework of international and regional organizations.
Particular attention has been paid to the implementation of the agreements reached during the bilateral meeting of the President of Uzbekistan Shavkat Mirziyoyev with the Prime Minister of Hungary Viktor Orban within the framework of the meeting of the Cooperation Council of Turkic Speaking States in October 2019, in Baku.
The ministers reviewed the schedule of the upcoming events at various levels, noted the need for the next round of inter-MFA consultations for a detailed study of the agenda and organizational aspects of bilateral contacts.
The parties confirmed the huge potential for further expansion of trade-economic and investment cooperation, discussed the mechanisms for increasing the volume of bilateral trade.
Interest in developing relations in cultural-humanitarian sphere, in particular, establishing cooperation between the leading higher education institutions of the two countries was emphasized.
Foreign ministers also exchanged views on strengthening Uzbekistan – Hungary interaction within the framework of the Turkic Council and the format “Uzbekistan – Hungary – European Union”.
Following the meeting, a Memorandum of Understanding was signed between the Ministry of Foreign Affairs of the Republic of Uzbekistan and the Ministry of Foreign Affairs and Trade of Hungary on cooperation in diplomatic training and exchange of information and documentation.