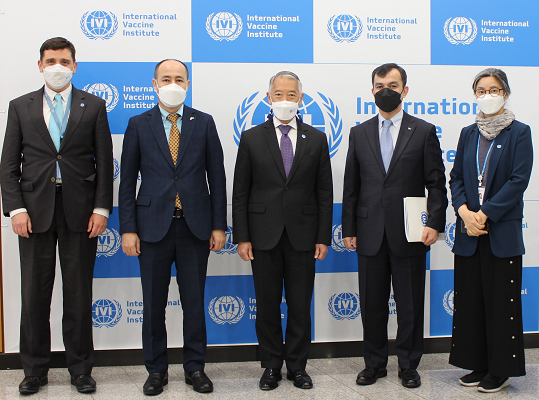 The establishment of IVI was initiated by the UN in 1997 on a contractual basis to develop vaccines against the deadliest infectious diseases. IVI, headquartered in Seoul, is an autonomous and independent non-profit international organization operating under an agreement signed by 36 countries and the World Health Organization.

In collaboration with the international scientific community, health organizations, governments and industrial enterprises, IVI is involved in all stages of vaccine development – from new vaccine design in the laboratory to their development and evaluation at the site of use, which contributes to the sustainable introduction of vaccines in the countries where they most needed. To this day, IVI has transferred vaccine technology to a wide range of manufacturers in low- and middle-income countries, assisted WHO in vaccine prequalification and participated in capacity building in more than 40 countries around the world.

The parties exchanged views on the current state and prospects for enhancing cooperation between Uzbekistan and IVI.

Mr. Jerome Kim expressed deep gratitude to Uzbekistan for its participation as a member country of IVI since May 29, 1997. He noted the need for further intensifying interaction between the parties. To this end, the International Vaccine Institute proposed to consider the possibility of signing a bilateral document providing for specific areas of practical cooperation with Uzbekistan.

IVI Director General expressed his readiness to attend the First International Scientific Congress on COVID-19, to be held online on June 1-4 by the Service of Sanitary and Epidemiological Welfare and Public Health of Uzbekistan.