In the fall of 2022, the Louvre in Paris will host the exhibition “Splendor of Central Asia. On the caravan routes of Uzbekistan” 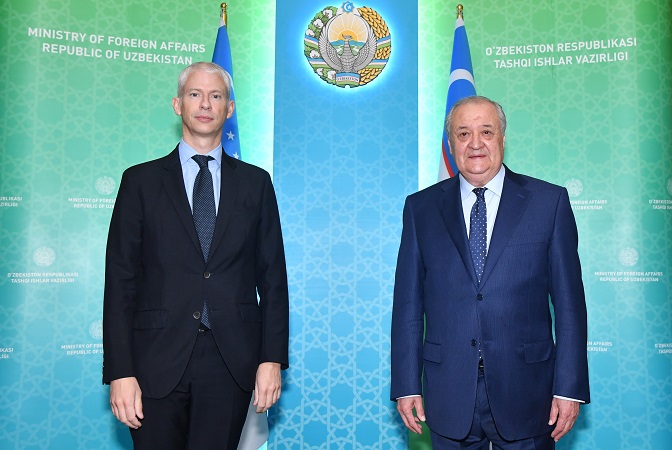 TASHKENT, May 10. /“Dunyo” IA/. Today, the Minister of Foreign Affairs of the Republic of Uzbekistan Abdulaziz Kamilov met with a delegation of the French Republic led by the Minister Delegate for Foreign Trade and Economic Attractiveness Franck Riester, who arrived in Tashkent to attend the 8th meeting of Uzbekistan – France Intergovernmental Commission on Trade and Economic Cooperation, reports “Dunyo” IA correspondent.

The parties discussed the state and prospects for the development of cooperation in the political, trade, economic, cultural, humanitarian and other spheres.

The ministers considered the course of implementation of the previously reached agreements, including within the framework of the telephone conversation of the heads of the foreign affairs agencies of the two countries that took place on May 3.

The main attention during the talks was paid to issues related to the preparation of the upcoming joint events at various levels.

The French side expressed its readiness to provide all possible assistance in organizing an exhibition in the fall of 2022 on “Splendor of Central Asia. On the caravan routes of Uzbekistan” at the Louvre Museum in Paris, which will become a bright event in the cultural life of the two countries.

Following the talks, the heads of delegations signed the Program of Cooperation between the ministries of foreign affairs of Uzbekistan and France for 2021-2022.