High honors of the homeland are awarded 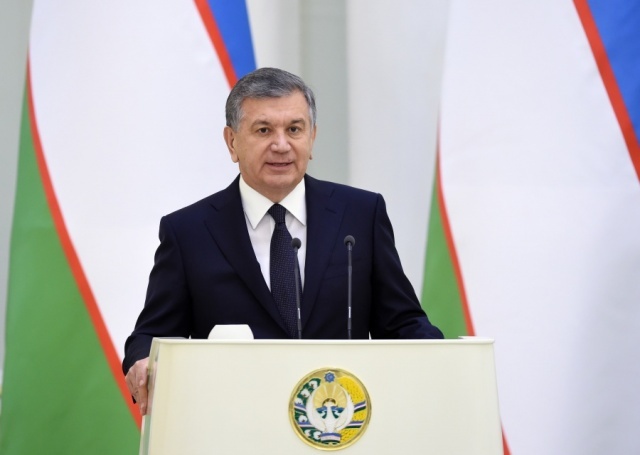 A group of our compatriots who made a great contribution to the development of the country, demonstrated self-sacrifice in strengthening peace and tranquility, achieved success in socio-economic, scientific-technical, spiritual-educational spheres of society had been awarded high state awards – honorary titles, orders and medals by the decrees of the President of our country Shavkat Mirziyoyev in honor of the 26th anniversary of the independence of the Republic of Uzbekistan.

On December 7, solemn presentation of these high awards of the homeland took place with participation of the President of the Republic of Uzbekistan Shavkat Mirziyoyev, in Tashkent. The Head of our state warmly welcomed the gathered, honored with high awards, orders and medals. Congratulated all our compatriots on the 25th anniversary of the adoption of the Constitution.

The President of our country emphasized that all reforms that are being implemented today are based on the Constitution and the Action Strategy. Focusing on the implemented activities in the end of the year, Shavkat Mirziyoyev noted the special attention paid to the dialogue with people and to alleviating concerns of people.

Today, authoritative international experts and specialists recognize the serious results of involvement of this system.

Our people want above all peace and tranquility, and only then – a roof over their heads, a healthy and prosperous life for themselves, their families and children. We are paying great attention to two issues for implementation of these goals and aspirations of our people, that is, reforming the system of bodies of internal affairs and healthcare, said Shavkat Mirziyoyev.

A large-scale activity was carried out in this direction. The district inspectors for prevention are provided with office cars and housing. Every Thursday of the week is declared as the Day of prevention of offenses. The “Safe city” project is being implemented.

Large-scale activity that is being carried out on creation of all necessary conditions for youth, starting with a healthy birth and to entering into an independent life is noteworthy. Another important step in this direction was the introduction by the Head of our state of an initiative on adoption of an international convention on the rights of youth at the session of the UN General Assembly that was held in September.

This year, the Law “On the state youth policy” was adopted among other normative legal acts. The Union of Youth of Uzbekistan has been established, the post of deputy head on the issues of youth has been established in all state bodies and makhallas.

Care for women, respect for them are the noblest feature of our people. Therefore, issues of revitalization of activities of the Women’s Committee of Uzbekistan and its regional branches, increasing the role and influence of women in the family and society, worthy evaluation and stimulation of their work, provision of vital interests are in the center of constant attention of our state.

At the same time, huge updates have occurred in the healthcare sector. Important tasks related to cardinal improvement of drug provision, emergency medical care services, activities of rural medical stations, organization of activities of specialized medical centers in the regions have been executed. More than 800 family polyclinics, over 400 emergency medical care stations have been opened on the basis of rural medical stations. About 700 doctors working in the village are provided with official housing.

About 60 qualified doctors of Uzbekistan who worked in prestigious foreign clinics returned to the country, all amenities are created for them. Today they are working for improvement of health of their people. Highly qualified specialists from leading foreign clinics are visiting Uzbekistan and carrying out complex operations. Branches of the capital’s specialized medical centers are being organized in the regions. One of the most important tasks is the issues of improving patronage and screening services.

Particular attention today is also paid to further improving the road and transport infrastructure, public services. Large-scale programs are being implemented on providing villages with clean drinking water, natural gas and electricity. New parks of culture and recreation, leisure centers, cinemas, exhibition halls and libraries are being built at places.

Modern affordable houses on updated projects are being built in modern cities and villages. This year 191 multi-storey houses have been erected in the cities, 24 thousand houses of a new type in the villages. As a result, more than 33 thousand families, including 7 thousand young families received houses.

The Head of our state, touching on the theme of sustainable economic development, especially noted the creation of dozens of new industrial enterprises, the liberalization of the foreign exchange market and establishment of free conversion of sum.

It should be noted that due to the provision of additional benefits and preferences for entrepreneurs, practical actions for accelerated business development, new industrial enterprises, service delivery points are being opened, the most important is that thousands of people are provided with work.

In the current agricultural season, our skilled dehkans and farmers, despite the difficult climatic conditions and weather whims, were able to raise high grain and cotton hirmans (clusters), to grow a rich harvest of fruit and vegetable products. Speaking about this, Shavkat Mirziyoyev noted that starting from this year, the Day of agricultural workers is celebrated in our country, in connection with which harvest festivals are being held in all districts and regions these days.

A number of important decisions regarding the development of science, literature, art and culture were taken. The Head of our state held several meetings with representatives of these spheres, discussed actual tasks with them. Necessary means and resources have been allocated for strengthening scientific and material-technical base of the Academy of Sciences. New research centers and technoparks have been established. An important step became the establishment of the Ministry of Innovative Development.

Science is the basis of progress, said Shavkat Mirziyoyev. The state and society, not based on scientific achievements, innovative ideas, do not have a future. We will be able to bring Uzbekistan to a new level of development only at the expense of science and education, high intellectual potential, well-educated cadres.

One of the most important events of this year, the result of which is obvious, is reaching a new level of relations of friendship and cooperation with the countries of near and far abroad, primarily with neighboring states. Historical agreements on border issues have been reached. In our country, the atmosphere of interethnic harmony and mutual respect has strengthened.

The Head of our state, analyzing the implemented work in 2017, especially noted that life itself convincingly proves that the state only acquires, overcomes all difficulties on its way and achieves the planned noble goals by conducting a dialogue with people, consulting with them.

Therefore, good deeds that have started this year will be consistently continued.

Member of the Union of Writers of Uzbekistan, literary scholar Ibrahim Gafurov, member of the Union of Writers of Uzbekistan, poet Bakhtiyar Genjemuratov, laureate of the State Prize of the second degree Vera Belotserkovets, cavaliers of “El-yurt hurmati” (“Respected by people and homeland”) order – labor veteran Kallibek Kamalov, chairman of Namangan regional department of “Nuroniy” Foundation Ikromkhon Najmiddinov, the cavaliers of “Mehnat shuhrati” (“Labor Glory”) order – Head of “Ulugbek” Foundation for supporting gifted youth Okil Salimov, professor of the department of land transport systems of Tashkent State Technical University Azmiddin Sadriddinov, director of the specialized general education boarding school No.26 of Boz district Galina Tsoy, the holder of “Dustlik” (“Friendship”) order, chairman of Samarkand regional department of the “Nuroniy” Foundation Hasan Normuradov and others expressed sincere gratitude to the President of our country for such an assessment of their modest merits and high recognition of the Motherland.