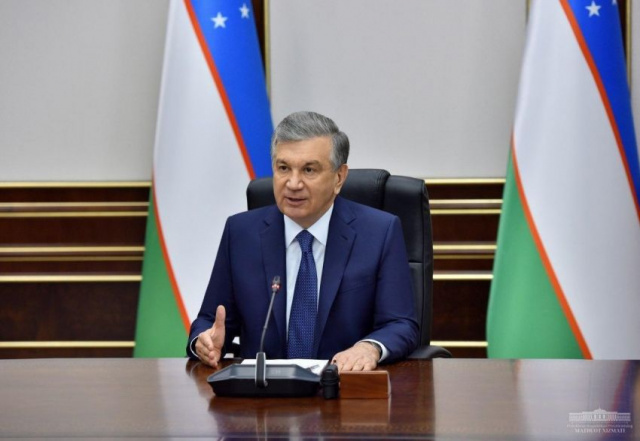 On May 28, President of the Republic of Uzbekistan Shavkat Mirziyoyev held a meeting to discuss priority tasks in ensuring a competitive environment in the economy and protecting consumer rights.

Uzbekistan's relations with the world economy are becoming more intense. This requires ensuring a competitive environment in the domestic market and increasing the competitiveness of domestic producers.
The Head of the state noted that the issue of competition is of fundamental importance in the process of Uzbekistan's transition to a market economy.
“I am constantly concerned about the question: are our companies able to withstand competition from outside? Can their products compete with their counterparts imported from abroad? If we manage to reduce the cost of our products and, accordingly, the final price, external suppliers will purchase it from us”, said the President.
Today, 245 enterprises maintain their monopoly status in the market of 31 groups of goods and 82 types of services. However, 70 enterprises for 19 types of goods and services that have already formed a competitive environment on the market can be excluded from the register of monopolists.
“If there is no competition, then there is no quality, prices will not decrease. Times are changing, but monopoly enterprises not. We are out of the way with them. It’s time to take tough measures. For us, this is a matter of life and death of economy. If the managers meet the requirements, they will continue working, if not, they will leave”, noted the President.
In this regard, the task was set to review the approach to determining monopoly state of enterprises in the market, to approve a roadmap aimed at sharply reducing the list of monopoly goods.
“We must study the world experience and form our own course. We should have a common vision regarding demonopolization, ensuring competition and consumer protection” said Shavkat Mirziyoyev.
The importance of implementation of the system of antimonopoly compliance in enterprises with state shares, leadership training in the basics of competition by the end of the year and compliance with participation of the World Bank and the European Bank for Reconstruction and Development was noted.
“When will we be ready to compete? When our spheres and industries are ready for this. The spheres will be ready, if there are specialists. Our most vulnerable point is a lack of qualified specialists and there are no standards. Therefore, we must build this work almost from the very beginning”, emphasized the President. The need was noted for creating a completely new system to promote competition and counteract monopolies. Instruction was given to organize a separate faculty in higher education system in the direction of competition development, to establish full-time and part-time forms of education, to introduce new subjects and academic hours.
The task was set to organize short-term courses on competition development for managers of monopolistic enterprises and khokims at Business and Entrepreneurship High School, to attract experts and professors from international financial organizations to the educational process.
The importance of establishing advanced training courses for judges on the basis of Tashkent Law University in order to consider disputes in competition, specialization of judges in this area and organization of a separate judicial board was noted.
The issue of effective use of economic benefits was also discussed.
For example, 23 fat-and-oil companies that received benefits did not create enough new jobs.
On the contrary, as a result of creating a competitive environment in the poultry and fish farming industries, the production of poultry meat over the past four years has increased from 100 thousand to 205 thousand tons, and fish from 65 thousand to 122 thousand tons.
“Results of demonopolization of poultry and fish farming industries are being felt. Entrepreneurs feel free to compete. It is necessary to produce goods and services, the price and quality of which meet market needs. If there is competition, population will have a choice, their purchasing power will grow and people will be happy”, said Shavkat Mirziyoyev.
Consumer protection activities were analyzed in detail.
“A lot is said about consumer protection, but in practice there is no coherent system. There is no favorable environment for this, there is no relevant knowledge, no explanatory work in media”, said the Head of the state.
50 percent consumer complaints out of 11 000 received by the Consumer Protection Agency last year is related to utilities and transportation, 25 percent to commerce, and the remaining 25 percent to communications, financial services and others.
The main reason is that monopoly enterprises operate under internal acts that pursue their own interests rather than consumers’ interests.
The importance of expanding powers of the Agency for Consumer Protection under the Antimonopoly Committee was emphasized.
Instructions were given to prepare a draft resolution on radical improvement of activities of Antimonopoly Committee of the Republic of Uzbekistan based on the tasks set at the meeting.
It was instructed to consider the issue of establishing the Committee's accountability to the Oliy Majlis – highest representative authority that directly protects consumers’ interests.