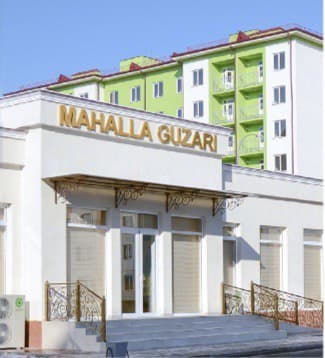 Stages of formation of the history of Mahalla

“Mahalla" is a socio-economic and territorial community that serves to observe certain national, moral and household procedures, to spend good and bad days together, to ensure harmony In the East, in particular, Uzbekistan, the traditions of living as a community have been appreciated from time immemorial. The mahalla is the brightest view of the community, as the sources testify, its roots have a very ancient history — it dates back to the Bronze Age.

“Mahalla", which appeared long before the Arab invasion and the adoption of the Islamic religion, is a community of people living in a certain small territory, intertwined with personal ties, a commonality of interests and obligations, participation in common affairs.

Sources testify that from the third century BC to the beginning of the 5th century BC in the Parkana (Fergana region) state there was a «Council of elders», engaged in such important tasks as the conclusion of a truce, the appointment of Ministers and taxes, the mobilization of collective affairs.

In large cities, local government was formed in the VIII-XIII centuries and the so-called «mahalla» (Arabic» mahallun « -a place where citizens live and work) came into consumption. Elected by the people, the «ellikboshi», while the big "mahalla"s were headed by «amin».

In the XIII-XVI centuries, the mahalla rose to the level of a specific association, led by "kadhudu", elected by the local population.

In the XVI-XIX centuries, the mahalla was referred to by several names (such as "mahallat", "yer", "daha", "jamoa", "el", "yurt"), and officials such as «unboshi», «ellikbashi», «yuzboshi», «amin» were given great rights and powers, they were subordinated to the city, the plot «pristav» in the Rural Management System.

Historically, the mahalla was headed by an elder, he was specially elected, led the daily life of the team.

Candidates for the "Oksokol" were invited by the most respected and statesman members of the mahalla, then it was approved by the local kazikalon. The one who held the post of the elder was always in power, and even the Kings respected him very much.

The great Amir Temur is in his «Timur regiments»...I respected every property and the country's Lords, Princes, elders, gave them gifts and took advantage of their services,» he said, expressing his respect for them.

As a result of such attention and recognition by sahibqiron, Alisher Navoi, Zahiriddin Muhammad Babur also showed special respect for the region's elders.

The second half of the XIX and the beginning of the XX century — the time of the Russian Empire, the mahalla's «mingboshi», the mahalla's «ellikbashi» in the composition of the dahas, several mahallas were attached to the «tavochi».

During the current administrative-command system of the XX century, the activities of the mahallas were limited, not officially recognized, they practically did not have administrative and managerial powers.

Concrete measures have been developed to restore the social status of the mahalla in society, forming it as an active collective structure.

The existing legislative base of the independent Uzbekistan has been further improved in the further development of the system and the formation of the mahalla as a truly supportive structure for citizens.

In particular, its powers as a self-governing body were established, and its role and status in the management of society was strengthened through Article 105 of the Constitution.

It should be noted that the beginning of the «third renaissance» in Uzbekistan is assessed by the period when the mahalla institutions began to find a sociopolitical gloss.

Especially at a time when the world was at risk of «alienation» due to the pandemic, that is, the distance of people from each other, egocentrism, the highest values of society, such as solidarity, tolerance, were preserved in people living in the mahalla.

In particular, according to the decree of the president of the Republic of Uzbekistan № PF-5438 of February 18, 2020 «on measures to restore the socio-spiritual environment in society, further support of the Institute of the mahalla, as well as to bring the system of working with family and women to a new level», the status of the meetings of local citizens has been set.

In order to further strengthen the role of citizens' gatherings in ensuring the tranquility of the population, bringing the system of work with families and women to a new level, on the basis of the decree, on the basis of the decree, the Ministry for mahalla and family support of the Republic of Uzbekistan, its regional divisions and the Scientific-Research Institute «Mahalla and family» under the ministry were established.

New positions in the mahalla management system, including the positions of the chairman of the gathering of citizens on the issues of law enforcement, family, women's and socio-spiritual issues, beautification, farmland and entrepreneurship were introduced.

This specific path has started a new era in the sphere of further improvement of the mahalla system, closer assistance to the meetings of citizens, provision of state assistance to it.

During the years of independence, the mahalla has become more active as a structure that embodies the most humane features of democracy, which can penetrate deeply into the problems and concerns of every family, every person.

At the initiative of the President of our country, the concept of «mahallabay» came into use, which means that the level of efficiency of government bodies and their activities can be considered «positive» only if they are reflected in mahallas.

As a result of this, socio-economic reforms, projects carried out on the account of internal and external resources, the creation of «activity corridors» of various offices and organizations at the cross-section of the mahallas were determined.

Heads of all levels were assigned to study the situation in the mahallas on their territory, identify «points of growth» and the issue of their development as a priority task.

The main criterion was the effective implementation of a new system for solving social problems of the population on the basis of the principle «The chairman of the mahalla is a reformer.»

This has become a popular, necessary and new approach of «New Uzbekistan» in the field of state and public administration.

Now the heads of the mahallas have the authority to set specific tasks for the socioeconomic development of the territory, to eliminate the problems of the population, to create new jobs, to support entrepreneurs in front of state bodies and responsible organizations, to demand their implementation strictly.

The system of cooperation on the basis of the printing «mahalla - sector - people's reception - mahalla» on working with appeals, identifying and solving problems of the population was introduced.

In order to make effective use of the rich life experience of the representatives of the older generation and the employees of law enforcement agencies in retirement in maintaining the stability of the socio-spiritual environment in the mahallas, the «advice of the elderly» groups were formed.

In order to encourage enterprising citizens and representatives of public structures who made a worthy contribution to the implementation of the relevant tasks in the selfgovernment bodies of citizens, a badge «Mahalla iftihori» was established.

In accordance with the law of the Republic of Uzbekistan «on public control», it is defined as a subject that establishes effective public control over the activities of state authorities and governing bodies and their officials, and today the place and position of the mahalla in this regard is becoming increasingly high.

In particular, the introduction of a procedure for studying and solving problems of the population according to the principle «Mahalla - Sector - People's Reception - Mahalla» serves to transform the institution of the Mahalla into a more democratic structure, living with the concerns of the population.

The implementation of public control by the self-governing bodies of citizens, in turn, plays an important role in ensuring the rule of law, their full implementation in practice, solving problems that may arise in the territory, and, most importantly, in the further improvement of the system of comfortable living of citizens.

As a result of the establishment of a separate ministry in the country, which deals with the issues of mahalla and family at the state level, which has become a close assistant to the meetings of citizens in this regard, the work on supporting the mahalla system has reached a new level.

The ministry works as an important organization in the direction of taking the activities of the mahalla system, which is directly working with the people, forming as an important social institution, to a new level, increasing its status, developing the activities of the Citizens ' Assembly, supporting the family, women and the elderly, protecting their rights and legitimate interests, comprehensive support of families in need.

Over the past year, the result of the reforms carried out in the system has been noticeable to the most remote areas, and as a result of the regular support of the activities of the citizens ' gatherings, a significant increase in the work efficiency in the field has been achieved.

In the last year alone,more than 61 thousand people were involved in entrepreneurship and crafts, and about 188 thousand citizens received assistance in obtaining loans for the development of family businesses.

More precisely, at the same time, the chairmen of the mahallas became the real owners of their territories, performing specific tasks to ensure the peace of their mahallas, attract the population to entrepreneurship, rational use of land and ensure the well-being of the region.

The analysis shows that until this time, as a result of the repetitive functions of several public organizations in the performance of these tasks, the identification of the existing problems is delayed, the existing problem would not find the responsible owner, but would lead to the fact that the people would walk in the office as a whole. The integration of these directions into a single system within the framework of the functions of the Ministry of mahalla and family support has led to a multiple increase in the efficiency.

The ministry is taking a worthy place in the hearts of our people as the most nationalist and the closest state body to people, as well as a new system for social protection of low-income families.

The ministry and its territorial structures are working closely with state and public organizations in the field of working with the problems of the population, carrying out public control over the events taking place in the society, improving the socio-spiritual environment, preventing various crimes.

In a word, these historical changes, which were chosen as a specific way of determining the development of the country, for this purpose, creating an area of communication between the state and the people, have initiated a radical turn in the sphere and a new era.